Fox News’ Chris Wallace gave CNN’s Jake Tapper somewhat of an eye-roll on Friday, dismissing the other anchor’s “moral posturing” when it comes to booking — or not booking — certain Republicans as cable news guests.

“I don’t think moral posturing goes well with newsgathering,” Wallace told the outlet. Tapper previously said he had a “philosophy” against giving airtime to GOP representatives who push conspiracies about the 2020 election. Tapper confirmed his stance in a podcast interview with the New York Times’ Kara Swisher last week. 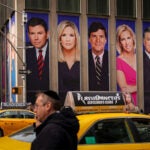 Wallace went on, “There are plenty of people I would like to have on ‘Fox News Sunday’ that voted to challenge the election — House Republican leader Kevin McCarthy for one. And I don’t have any rule about what the first question has to be. I have asked plenty of guests about voting to challenge the election and about Trump’s role in the January 6 insurrection. But I cover the news, wherever that takes me.”

Playbook didn’t just publish Wallace’s pushback, but took it straight to Tapper for a response.

“This isn’t a policy, it’s a discussion I think everyone in the news media should be having,” he replied. “Should those who shared the election lie that incited the deadly attack on the Capitol and that continues to erode confidence in our democracy be invited onto our airwaves to continue to spread the Big Lie? Can our viewers count on these politicians to tell the truth about other topics? This isn’t an easy conversation for some folks — especially for journalists who work for organizations where the Big Lie was platformed — but that’s all the more reason to have this conversation.”

Tapper’s attack on Fox News is rooted, of course, in the fact that Wallace’s employer is currently facing a lawsuit from Dominion Voting Systems that accuses some of their on-air talent of promoting fraud conspiracies. Lawyers for Fox News moved to dismiss the suit in May, writing in a filing, “There are two sides to every story. The press must remain free to cover both sides, or there will be a free press no more. The freedoms of speech and press would be illusory if the prevailing party could obtain billions of dollars from the press because it provided a forum for the losing side.”