Christopher Abbott is the latest to join the cast of Sony’s Marvel movie “Kraven the Hunter,” an individual with knowledge of the project told TheWrap.

It’s unclear at this stage what his role in the film will be, but he joins a cast that includes Aaron Taylor-Johnson in the title role alongside Oscar-nominee Ariana DeBose, Russell Crowe, Fred Hechinger and Alessandro Nivola.

J.C. Chandor is directing “Kraven the Hunter.” The project is being billed as the next chapter of Sony’s universe of Marvel-licensed characters. Art Marcum & Matt Holloway and Richard Wenk wrote the screenplay, while Avi Arad and Matt Tolmach are producing.

Born into Russian aristocracy, Sergei Kravinoff a.k.a. Kraven the Hunter is an obsessive big-game hunter who was introduced as a Spider-Man villain in “The Amazing Spider-Man” #15 (1964), and created by Stan Lee and Steve Ditko. As seen in the original comics, Kravinoff began his career using the typical tools of the hunter but over time he developed a preference to take down large animals with his bare hands. After meeting a Voodoo witch doctor named Calypso, Kravinoff took an herbal potion that enhanced his physical powers and gives him the strength, speed and senses to match a jungle cat. The potion also extended his life, keeping his health and vitality for years to come.

Abbott had a recurring role on HBO’s “Girls” early in his career and also starred in films such as “Martha Marcy May Marlene” and “A Most Violent Year.” He had a breakout role in 2019’s “Catch-22” series from George Clooney, and he more recently starred in indies such as “Possessor,” “Black Bear,” “The World to Come” and “On the Count of Three.” He’s next meant to star in Yorgos Lanthimos’ next film “Poor Things” at Searchlight and the Apple TV+ series “The Crowded Room” with Tom Holland.

Abbott is represented by WME and Management 360. 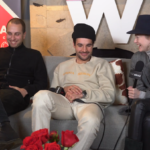 Also Read:
‘Possessor’ Stars Andrea Riseborough and Christopher Abbott Talk How They Got Inside Each Other’s Minds (Video)