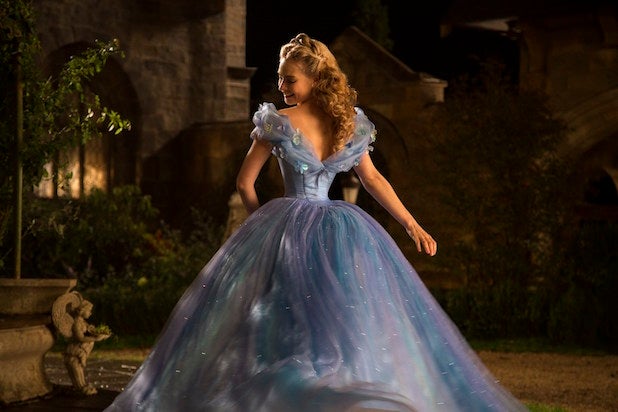 Disney’s remake one of its most beloved animated fairy tales with the live action “Cinderella” is paying off — both at the box office and with critics.

Not only did it rake in $23 million at the box office for its release on Friday and is on track to make $70 million by Monday, but it overwhelmingly won over film critics.

TheWrap’s lead movie critic Alonso Duralde wondered if the movie could do more to update the classic tale for modern audiences, but he also felt that the faithful retelling would please audiences.

“If you can get past the giant pumpkin in the ballroom — really, why bother to remake “Cinderella” in 2015 if you have no new spin on the material? — there’s a lot to like about director Kenneth Branagh’s gorgeously fanciful tale,” Duralde wrote.

“Hewing closer to the previous Disney animated version than to the Brothers Grimm’s or Stephen Sondheim’s — no stepsisters were blinded in the making of this motion picture — it’s a perfectly serviceable addition to the studio’s princess-industrial complex.”

Duralde also gave props to Blanchett, who “is having a great time vamping it up in a series of stylishly overblown costumes.” And felt Carter was “a more outrageous turn,” though her role is kept just short enough that even her most wildly showy moments don’t disrupt the mood of the rest of the movie.”

Those critics who appreciated the movie gave high marks to its straightforward retelling, its strong cast and Branagh’s directing. Others hoped for a more updated story and felt Branagh didn’t challenge himself.

Here are what other top critics are saying about “Cinderella”:

The new film, directed by Kenneth Branagh, is nothing if not a tribute to old-fashioned virtues, of care and craft and modesty, of simple stories well told.

The cast is uniformly strong, in particular James, who nimbly walks a tightrope between sweet and saccharine in the title role, and Blanchett, who is magnificent in her malevolence as Tremaine.

‘Cinderella’ is a smashing success, something of a perfect storm of fresh-faced new talent, seasoned guidance, opulent visuals and a classic fairy tale.

The result is “Cinderella” feels real enough to be sincerely touching at the same time it’s visually inventive enough to be magical. We’ve all seen this story, true; but we haven’t seen it told this effectively.

Directed by Kenneth Branagh with a sprinkling of stardust, dashes of good humor, and a respect for the corniest kinds of romance, Cinderella is a winning re-do of Disney’s 1950 animated classic.

Nathalie Atkinson, The Globe and Mail

That simplicity is the point here and frankly, it’s refreshing. In being faithful to the traditional tale interpreted by Disney in their animated 1950 classic, this Cinderella is crisp escapist enjoyment.

The production design is as textured as the plentiful gold galloon and filigree (what is not gilded is still picturesque – such as Ella’s dusty attic refuge, not so much a garret as a loft) and the romance floats on cinematography – the swirling dance at the palace ball, for example, is dizzying and exhilarating in equal measure, like a turn on the Magic Kingdom’s spinning teacups ride.

A new version from Disney, the company most people readily associate with the story, offers no surprises, but it does allow the heroine some agency. This time she actually gets to meet the prince before the magic gussies her up.

Young children are guaranteed to love this, even though it’s rated PG for no reason (fine, “mild thematic elements”)… As for the parents, who will be able to predict each line of dialogue before it’s uttered, don’t count on plot twists or much humor.

A regular on the television series “Downton Abbey,” Ms. James effortlessly holds the big screen, less because of her beauty than the life that both animates and demystifies that beauty, making it seem less other (even a touch aspirational) and her character feel approachable and likable.

Mr. Branagh’s ascension into big-budget studio directing largely remains a mystery, and there’s little in “Cinderella” beyond its faces and gowns that captures the eye or the imagination. His one interesting directorial choice is to fold in different performance styles, which tend to fall into exaggerated, almost-burlesque mode or a more familiar naturalistic expressiveness.

How could an esteemed filmmaker screw up a classic like “Cinderella”? By treating everyone in the audience like they were 5 years old, with no sense of the rich history of fairy tales or recent revisionist franchises like “Shrek” and “Once Upon a Time.”

Kenneth Branagh has directed several Shakespeare adaptations, including revisionist versions of “As You Like It” and “Love’s Labour’s Lost,” so he’s not averse to taking artistic risks with beloved material.

The only risk Branagh takes with “Cinderella” is the risk of boring anyone old enough to operate a remote control.

“Cinderella” is so scrubbed of personality, it’s not even worth calling a mess.