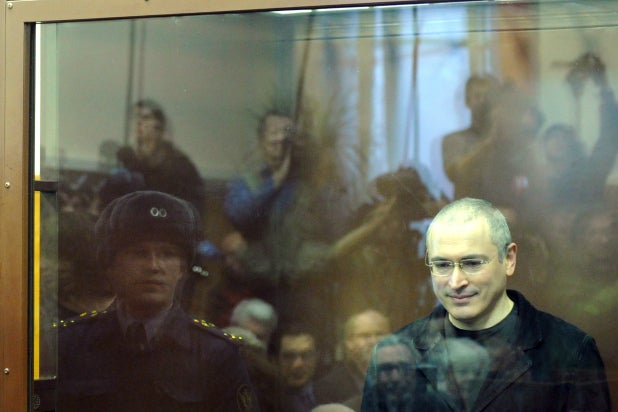 It’s the second half of that statement about which documentarian Alex Gibney is most concerned. The Oscar-winning director of “Taxi to the Dark Side” and “Going Clear: Scientology and the Prison of Belief” has pointed his camera at Khodorkovsky not to paint a nuanced picture of an impossibly rich and complicated man (as the allusion to “Citizen Kane” suggests) but to tell the bizarre story of how the rise of Russian President Vladimir Putin unexpectedly turned Khodorkovsky into a heroic arch-nemesis.

And like many stories of heroes and villains, the good guy isn’t questioned very much, while the bad guy steals the show.

“Citizen K” spends its first half detailing the tumultuous recent political history of Russian politics in which the fall of Communism led to a Wild West era of unchecked capitalism. A handful of powerful and determined oligarchs rose very quickly to financial power, often to the disadvantage of the Russian people, who were unaccustomed with individual wealth and easily conned by shady figures like Mikhail Khodorkovsky. Soon, Khodorkovsky controlled the country’s vast oil industry, and he and his oligarch cronies were using the newly liberated TV airwaves to keep an ailing Boris Yeltsin in power over his Communist opponents.

This, which every person interviewed in “Citizen K” seems to agree on, was a horrifying mistake, as it led directly to the rise of Vladimir Putin. A minor KGB official who somehow turned a kickback scheme into a promotion, Putin meandered into Yeltsin’s administration and soon became Yeltsin’s chosen successor. Putin quickly becomes president, and “Citizen K,” unsurprisingly, becomes The Putin Show.

What starts as a straightforward history lesson evolves into a catalogue of increasingly disturbing political maneuvers, in which Putin learns the power of the mass media and takes control over the whole enterprise. The brief era of strange-looking televised puppet shows, which openly critiqued politics in Russia, gives way to real-life puppet theater propaganda. Supposedly free television stations became tools of the president, towing the party line even when protestors are silenced via intravenous injection on camera.

Meanwhile, Khodorkovsky’s business suffers economic setbacks and, in an incident that would haunt him forever, a local mayor who challenged his business model was murdered on Khodorkovsky’s birthday. As circumstances change the oligarch’s perception of Russian political and economic realities — “You can’t imagine what it’s like to lay off tens of thousands of people,” he laments, without commenting on his own vast wealth — he becomes a more public figure, challenging Putin’s regime and, quickly, screwing himself over.

“Citizen K” catalogues Putin’s attacks on Khodorkovsky in a fascinating display of virulent insanity, as Khodorkovsky is convicted for refusing to pay taxes on the oil he sold and, later, convicted for never selling any oil at all. Khodorkovsky is accused of stealing 350 million tons of oil, an alleged criminal scheme that even the Joker would call idiotic.

Gibney knows how to condense decades of Russian history and strife into a fast-paced and mesmerizing documentary. It helps that, as Gibney himself puts it, “Over time, complicated stories become simple.” Many of his interview subjects, reporters and oligarchs alike, marvel at how near-sighted and easily distracted they were by the complexities of the time to recognize the bigger picture and act accordingly.

“Citizen K” captures the big picture and sharpens the focus. It’s an undeniably informative and vital documentary, which clearly illustrates a disturbing political farce that has been allowed to thrive for far too long. Which is to say, at all.

Where “Citizen K” falls short is its depiction of Khodorkovsky, whose early indiscretions are breezed over as quickly as possible in order to get to his redemption. Khodorkovsky can no longer set foot in Russia without getting arrested for the aforementioned murder, an investigation which seems to have been wrapped up years ago, only to resurface at Putin’s convenience. Khodorkovsky now works from his headquarters in England, running the “Open Russia” opposition campaign from afar and trying to heal the wounds he helped open in his home country.

But by focusing so much on Khodorkovsky as a person with ideals, Gibney’s film eagerly shies away from showing him as a far from ideal person. It’s as though Putin is so bad that, in order to combat him, Gibney needs to elevate the opposition to superheroic levels.

It’s hardly irresponsible. It may even be necessary in order for the documentary to have the intended effect and to allow this vital modern history lesson to inspire audiences and lead to real and lasting change. But it leaves “Citizen K” feeling somewhat incomplete as a portrait of its subject, a rich (in more ways than one) and fascinating person whose life took bizarre turns and transformed him from an unscrupulous billionaire to an extremely scrupulous millionaire, with political martyrdom and years and years of imprisonment and hunger strikes in the middle.