While we got a first look at “Clifford The Big Red Dog” — which horrified some because of its blood-red color and kaiju size — the first full trailer for the live-action film shows just how impractical having a pet of that size in New York would be.

This trailer shows Clifford playing with another dog and accidentally licking it up into its mouth before spitting it back out. It also shows Clifford chasing giant inflatable balls in which people in the park are rolling around inside for exercise, only for Clifford to proudly knock them across Central Park and carry the deflated shells back to his humans.

“This dog is killing me,” Clifford’s owner (played by Jack Whitehall) says in the trailer. 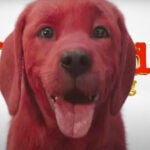 Walt Becker is directing “Clifford” based on the Scholastic book series. The film will open in theaters on Sept. 17 from Paramount.

Paramount also announced as part of this trailer that for every ️ or share the #CliffordMovie trailer gets, they’ll be donating $1 to Best Friends Animal Society, up to $20,000.