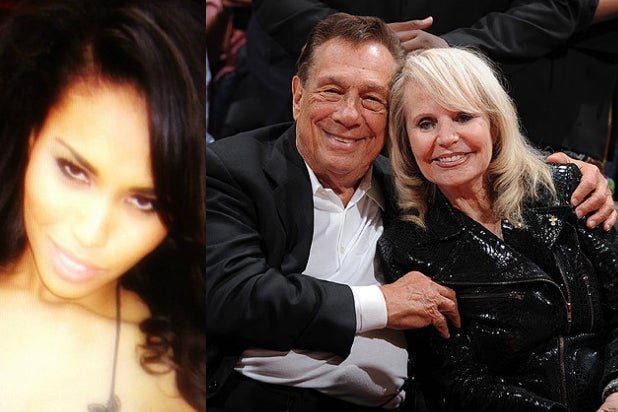 On Friday, Donald Sterling owned a basketball team. Not just any team – the Los Angeles Clippers, a team that was in a fierce NBA Playoff battle against in-state rivals, the Golden State Warriors.

By Tuesday, Sterling not only faced losing the team he owned since 1981, but he’d also been handed a lifetime ban from the entire NBA for racist comments caught on tape and leaked to the media over the weekend.

That may seem like awfully swift action to an outside observer, so TheWrap decided to take a look at how Sterling found himself in such hot water. We start with the March 7 lawsuit filed by Sterling’s estranged wife that might have led girlfriend V. Stiviano to rat out her man.

The Lawsuit
Rochelle Sterling, Donald’s estranged wife, filed a lawsuit on March 7 alleging that V. Stiviano (aka Vanessa Maria Perez, aka Monica Gallegos, aka Maria Monica Perez Gallegos, aka Maria Valdez) was only in a relationship with her husband to squeeze him for more than than $2.5 million in cars, property and cash from accounts that Rochelle and Donald shared.

“[C]ommencing in or about 2010 and to the present date, D. Sterling regularly provided community property funds to Defendant Stiviano that were used to pay for her upkeep and living expenses, believed to be an amount of not less than $240,000,” the lawsuit reads.

The suit also alleges Donald Sterling bought a Ferrari, two Bentleys, and a Range Rover for his girlfriend, which are worth a total of more than $500,000. In 2013, Rochelle says in the lawsuit, Donald Sterling gave Stiviano $1.8 million to buy a Beverly Hills duplex.

Rochelle, who is still married to Donald, wants all that back — plus interest and a restraining order against Stiviano.

The Recording
On Saturday, April 26, gossip website TMZ published audio of a conversation held between Stiviano and Sterling, where the Clippers owner admonishes his girlfriend for posing with black people on Instagram – including NBA great Magic Johnson.

Sterling also asked Stiviano – who is multiracial – not to bring black people to Clippers games.

“It bothers me a lot that you want to broadcast that you’re associating with black people. Do you have to?” Sterling said on the recording.

The Los Angeles Clippers organization initially defended Sterling, saying that such racist behavior was out of character for the owner. They also suggested that Stiviano leaked the conversation as retribution for the lawsuit.

“We do know that the woman on the tape — who we believe released it to TMZ — is the defendant in a lawsuit brought by the Sterling family alleging that she embezzled more than $1.8 million, who told Mr. Sterling that she would ‘get even,'” the team said in a statement.

The Reaction
The sports world, the entertainment industry and even the President of the United States expressed outrage at Sterling’s comments.

The Los Angeles NAACP withdrew its planned lifetime achievement award for Sterling, which it had planned to present to him for his donations to youth charities despite years of known racist remarks and behavior.

At least 13 major companies pulled their sponsorship of the Clippers on Monday — including some, like Kia — that had endorsement deals with individual players on the team.

Of course, Sterling had his supporters. Donald Trump came rushing to Sterling’s side, blaming the girlfriend for setting Sterling up, and Rush Limbaugh erroneously called the owner a “typical Hollywood Democrat” who only got flak for his statements because he didn’t donate enough to the Obama campaign.

The Punishment
After less than a day of deliberating, the NBA issued a severe punishment to Sterling that left the Clippers organization largely unscathed.

NBA Commissioner Adam Silver handed down a maximum $2.5 million fine and a lifetime ban from the league, which means Sterling cannot attend games or practices or be part of any league business. He can also no longer enter Clippers facilities or participate in organizational decisions.

Silver will also petition the other NBA owners to force Sterling to sell the team. If two-thirds vote to expel him, the Clippers will be up for sale.

That could be bad news for a team that’s trying to win its first ever NBA Championship title, but a number of potential suitors are already lining up to buy the team.

Hollywood mogul David Geffen told TheWrap he is interested in taking over the Clippers; Geffen had reportedly made an offer for the team several years ago.

Magic Johnson has said in recent days he’d be happy to buy the team, and Oracle CEO Larry Ellison – who had previously tried to buy the Golden State Warriors – has been floated as well.