Even with new cooks in the kitchen, “Cloudy With a Chance of Meatballs 2” is a completely delicious dish, as it adds a handful of great new ingredients to a familiar recipe.

Unquestionably the most pun-filled movie of 2013, Cody Cameron and Kris Pearn’s follow-up expands the world of machine-made delicacies in supremely weird and wonderfully silly directions while preserving the charm and chemistry of the characters introduced in the first film. Simultaneously more adventure-filled and less emotionally affecting than its predecessor, “Cloudy With a Chance of Meatballs 2” makes a shift from disaster-movie to creature-feature tropes with its buffet of savory set pieces and effervescent visuals, garnished with delectably sharp-edged humor.

Bill Hader reprises his role as Flint Lockwood, the inventor of “FLDSMDFR,” the machine that turned water into food before it transformed his hometown of Swallow Falls into a smorgasbord of oversized chow. After being recruited to work for Chester V (Will Forte), a Steve Jobs-like CEO whose company Live Corp is tasked with cleaning up his mess, Flint hunkers down to create the next great device to better humankind. 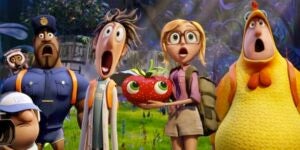 But as he, his dad Tim (James Caan) and his pals Sam (Anna Faris), Brent (Andy Samberg) and Earl (Terry Crews) settle into new lives in San Fran Jose, they are soon asked by Chester to return to Swallow Falls, where they discover that his machine has started producing “foodimals,” living creatures, you guessed it, made out of fruits, vegetables and other tasty vittles.

Beyond the film’s incredible variety of cleverly named creatures, including “susheep,” “watermelephants,” “tacodiles” and “shrimpanzees,” “Cloudy 2” finds more humor per square inch than, well, any film since the original. Eager to indulge the exaggerated squash-and-stretch style of animation that gave the first film its buoyancy, Cameron and Pearn design amazing new sets – like Live Corp’s headquarters, a gigantic light bulb – and then basically explore them like kids digging through a toy box.

At the same time, the duo manages to keep a tight leash on the story, even as they’re deconstructing the conventions of the genres they’re using as a basic narrative framework, which provides plenty of straightforward gags for kids while offering a meta-text that adults will enjoy.

Dealing with his first taste of “popularity,” Flint struggles to find a midpoint between the trust of his new boss and confidante, Chester, and the loyalty and common sense of his buddies. Hader continues to perfectly balance the character’s earnest nerdiness, a suitably bonkers imagination, and an occasional susceptibility to social acceptance, making him someone who might test our patience in real life, but on film is a hero we sympathize with and are eager to see prevail.

Faris’ Sam unfortunately has less to do this time around, but thankfully Cameron and Pearn preserve her pre-Hollywood makeover style of a ponytail and glasses, making sure she’s an integral and equal part of the group rather than simply Flint’s love interest. As Chester, meanwhile, Forte gets enormous mileage out of his not-so-quietly self aggrandizing “benevolence,” managing to make him a perfect embodiment of what Flint aspires to be, albeit without the underlying humanity that makes his new student such a great, likeable kid.

Also read: ‘Cloudy with a Chance of Meatballs 2’ Trailer: The Food and the Furious

Regardless whether its “Jurassic Park” and teen-movie goofs are particularly resonant with you, the animation is simply gorgeous, and utilizes the free reign of its filmmakers imagination to create landscapes that are perfect both for physical confrontations and emotional standoffs. (A lake-sized pool of syrup provides both a wonderful sight gag and a perfect metaphorical location for Flint’s to choose between Live Corp and his friends.)

In which case, other than its comparatively muted emotional resonance — there are no tearful moments like the first film’s reconciliation between Flint and Tim — the only caveat to offer about this sequel is that if you have any dislike of puns, be warned that there are a ton of them. But even though it doesn’t feel quite as fresh or satisfying as the first film, “Cloudy With a Chance of Meatballs 2” offers a surprisingly filling second serving for a series that should probably have only amounted to an amuse-bouche.