Carter Burwell, a composer and a longtime collaborator of the Coen Brothers, said on a recent podcast interview that Joel Coen and Ethan Coen’s future as directors may be uncertain.

Burwell, who has worked with the Coens dating back to their debut “Blood Simple” and is a composer on the upcoming “The Tragedy of Macbeth,” was asked on the podcast “Score” why only Joel Coen is credited as a writer and director on “Macbeth.” And Burwell perhaps surprisingly said that “Ethan just didn’t want to make movies anymore.”

“Ethan seems to be very happy doing what he’s doing, and I’m not sure what Joel will do after this,” Burwell said.

Ethan Coen previously told the Los Angeles Times in 2019 that he was “giving movies a rest” to focus on his solo play writing, but “Macbeth” marks the first time since some of their early films that the two are billed separately and in which Ethan is simply not involved at all with the film. But what comes next for them isn’t clear.

“They also have a ton of scripts over the years that have been sitting on various shelves. I hope maybe they get back to some of those because I’ve read some of them and they’re great,” Burwell went on. “But I don’t know. We’re all at an age where you just don’t know. We could all retire, but I don’t think that’s exactly what’s going to happen…It’s a wonderfully unpredictable business, right? I just don’t know.”

Representatives for Joel and Ethan Coen did not immediately return TheWrap’s request for comment. 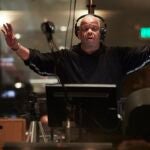 “The Tragedy of Macbeth” is a Shakespeare adaptation starring Denzel Washington and Frances McDormand that comes from A24 and will be released by Apple after it makes its world premiere at the New York Film Festival as the opening night film on September 24.

The previously prolific Coen Brothers previous film together was 2018’s “The Ballad of Buster Scruggs,” and they wrote a screenplay for an upcoming remake of “Scarface.”

Watch the full podcast with Carter Burwell on “Score” discussing the Coen Brothers here or at the top of this page.