Stephen Colbert is very, very excited for the Jan. 6 committee hearings, which will air in primetime, beginning later this week. In fact, he’s so excited, he announced “The Late Show” will be going live each night just after they finish.

“I don’t know about you, but I cannot wait for the Jan. 6 committee’s live hearings. On Thursday. In primetime,” Colbert said as he opened his Tuesday night monologue.

“They’re destined to go down in the annals of live TV like the Watergate hearings, the moon landing and the time Walter Cronkite was swallowed by a python,” he continued, showing a photoshopped pic of the late newsman exactly as he described. “It’s going to be an historic event, which is why ‘The Late Show’ will be going live. Right here, baby. After the hearings. Thursday night. Come on. You can’t keep us down. You go live, we go live. Come on. I’m tired already. I am pre-exhausted.” 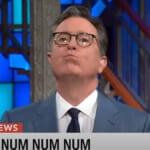 Colbert then turned his monologue’s attention to who will and who won’t be covering the hearings live.

“Here’s the deal: All the major news outlets — CBS, NBC, ABC, MSNBC, CNN – will be covering the hearings live while the Fox News Channel will stay with its usual primetime lineup,” he said.

“Well, that’s actually good,” he said as some in the audience booed. “No, it’s actually good. We’ll hear directly from the people who planned the coup. And Sean [Hannity] can just read his tweets.”

As “The Late Show” host continued, he referred to former President Donald Trump as “Fraudo Baggins” (Colbert being a big Tolkien fan). He then went on to poke fun at committee member Jamie Raskin, a democratic, who told the Washington Post in a live interview that the select committee had found evidence beyond just incitement. 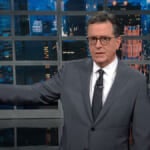 Also Read:
Colbert Rips Schumer for Not Getting Senators on the Record on Gun Issues Before 2-Week Break (Video)

“Ohhh, that is tantalizingly vague,” Colbert joked. “Reminds me of the original title of ‘Breaking Bad’ –  ‘About A Lot More Than Chemistry.’”

As his lengthy bit continued, Colbert addressed five members of the proud boys being indicted for sedition in the attack on the capitol.

“Which carries a maximum sentence of 20 years in prison. I gotta tell you, seeing those guys arrested, makes this boy proud,” he said, pretending to tear up.

You can watch Colbert’s full monologue above.