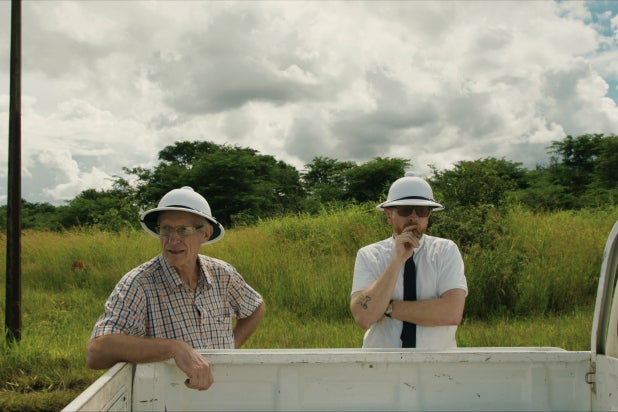 “It borders on fiction,” Danish filmmaker Mads Brügger explains at one point in “Cold Case Hammarskjöld,” his latest documentary. “Some of it is real and some of it is very difficult to prove.”

If only he had warned us sooner.

“Cold Case Hammarskjöld” is an unusual blend of investigative journalism and tacky artifice. The film chronicles Brügger’s pursuit of the truth behind the mysterious death of former United Nations General Secretary Dag Hammarskjöld, whose plane crashed in Northern Rhodesia (now Zambia) in 1961.

Unlike the rest of the passengers, Hammarskjöld was not burned beyond recognition. He also had a playing card stuck in his collar, which will be important later. And of course, Hammarskjöld was working to protect newly independent African nations from western (formerly colonial) influences. A lot of people had a lot to gain from his work, and a lot of more powerful, more dangerous people had plenty to gain from his death.

“This could either be the world’s biggest murder mystery or the world’s most idiotic conspiracy theory,” Brügger confesses. The filmmaker doesn’t appear to have a fully formed thesis when his research began, and by an hour into his flailing exposé of the corruption — steeped in lingering white supremacy — of sinister influences in Africa in the second half of the 20th century, it’s abundantly clear that “Cold Case Hammarskjöld” is formless and frustrating.

Brügger is nothing if not confrontational about his filmmaking style. He dresses in the all-white suits of one of the alleged villains of his documentary, a malevolent figure who could have been responsible for everything from Hammarskjöld’s death to the intentional spread of HIV throughout the African continent. He films himself playing solitaire using only the ace of spades, an image which looks dramatic in a vacuum but is also a flagrant attempt to spice up an otherwise meandering narrative.

Most troubling of all is Brügger’s use of two African women as his sounding boards. The filmmaker sits down in a hotel room with each woman, separately, conveying the whole story of the film to these objective listeners as they type up all his seemingly important insights and revelations. Brügger calls these kinds of aesthetic manipulations “old tricks of the trade,” and openly admits that they have no deep meaning. But the use of two women as props, not only to keep the film from feeling monotonous but also to comment on just how fascinating the documentarian’s own story is, is off-puttingly callous.

The second half of “Cold Case Hammarskjöld” picks up considerably, as Brügger begins to expand his inquiries past the U.N. Secretary General’s death and into the more pervasive conspiracies at work in Africa, on the part of outside governments and corporations. As the film’s scope expands, and Brügger is free to ask questions about more conspiracies, the film gets infinitely more fascinating.

But as important as the subjects Brügger tackles are, in the end they don’t seem terribly convincing. His key witness is almost suspiciously eager to talk, but as detailed as his accounts of clandestine mercenary groups in South Africa are, they’re still hearsay without further concrete evidence, and most of the evidence Brügger scrounges up on his end is circumstantial. Disturbing, certainly, and worthy of further inquiry, but hardly the headshot a piece of investigative journalism like this is looking for.

If “Cold Case Hammarskjöld” gets people talking, and more importantly asking questions, about malignant foreign policies and the grotesque, white-supremacist approach colonial nations have taken toward Africa in particular, it will have done most of its job. But its job was also to be an engrossing documentary and, simply, the film struggles too much with the format to be effective cinema.

The first half is a drowsy day at the office, full of complex paperwork minutiae that, too much of the time, doesn’t even pan out by the end of the movie. The second half is more horrifying to think about but less scrupulously presented and, as such, harder to believe. And watching the obviously clever Mads Brügger try to guile his way out of building a cohesive, consistently involving narrative out of these mismatched pieces is only amusing as an exercise in showmanship. It’s not very helpful in presenting his case.