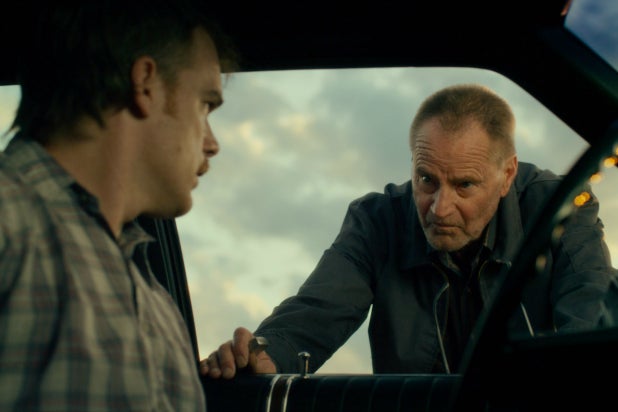 With its small-town-of-secrets vibe and pitch-black miasma of evil just outside of the glow of the streetlamps and headlights, Jim Mickle‘s “Cold in July” just flat-out works as a cool, cruel indie thriller. Set in the ’80s, which perspective has turned into a golden age for crime fiction — just before cell phones and DNA testing made everything so complicated for screenwriters and criminals both — it’s based on a novel by the crafty, under-read Joe R. Lansdale, nicely adapted for the screen by Mickle and regular writing partner Nick Damici.

“Cold in July” never actually turns into the film you think it’s going to, and even if that means there’s a few unanswered questions ricocheting around your head as the credits roll, it also provides real, rich pleasures as it zigzags into the darkness.

In East Texas, Richard Dane (Michael C. Hall) has a nice life: a good wife (Vinessa Shaw), a young son, a framing business that’s doing fine. But all it takes is one sound in the stillness to shatter peaceful sleep: Woken by his startled wife, Richard pulls out his gun and, half-conscious, goes to see what she heard is a trick of the night. It isn’t, though, and a startled Richard, face to face with a masked man in his home, pulls the trigger.

One shot, one kill … and no problem, according to hearty local cop Ray Price (Damici). The dead man, Freddy Russell, is a no-account ex-con wanted by the law: self-defense, evolution in action. But Richard doesn’t feel great about killing a man in cold blood, and he feels even worse when he learns that Freddy’s whipcord-tough, lifelong criminal father Ben (Sam Shepard, gloriously seamed and aged like fine wine) just got out of prison and may come looking for payback.

Like all classic noir heroes, Richard doesn’t know how deep the rabbit hole goes, but as Ben attacks, things begin to make even less sense; as the cops act more like crooks, and the crooks act more like victims or monsters, Richard gets tangled deeper and deeper in a web of conspiracies and sins. Mickle’s prior films, notably “Stakeland” and the superb remake “We Are What We Are,” proved that he can handle suspense and supernatural gore; here, he dials the intensity down while maintaining a sharp, smart focus.

The synth-heavy score and even the font used will remind some of ’80s John Carpenter, but even as a film of a 1989 book, the attitude on-screen is thoroughly modern in spite of the Reagan-era trimmings and trappings. It’s a modernized take on classic crime fiction’s themes and tropes, part Jim Thompson and part something else. “Cold in July” fits in with other excellent recent film festival all-American crime tales like “Blue Ruin” and “We Gotta Get Out of This Place,” and it wouldn’t be out of place put alongside “True Detective,” either.

Elaborating too much would puncture the pleasure of “July’s” myriad turns and changes, so let it be noted that Don Johnson is also along, and surprisingly good, as a private eye with a big car, bigger attitude and camouflaged cunning all employed to help Richard uncover the truth. When an unlikely trio steps forward for the film’s final action, there are plenty of tense moments even with a few plot holes left unfilled.

Richard, at first, seems too passive and plain to drive the action; underestimate him, like the film’s plotters, at your peril. Hall ‘s work as Richard, a chance to underplay after too many seasons of the numbing, hyperbolic “Dexter,” is the film’s surprise and secret weapon; portraying a dad, a man and a respectable member of society who goes looking for trouble and truth in the darkness, he finds both to his regret.

Mickle’s been a filmmaker to watch for years thanks to big ideas and deft craftsmanship; now that he’s brought those things to the screen in the service of name-brand actors, perhaps this will be the film where both Hollywood and audiences finally find him.