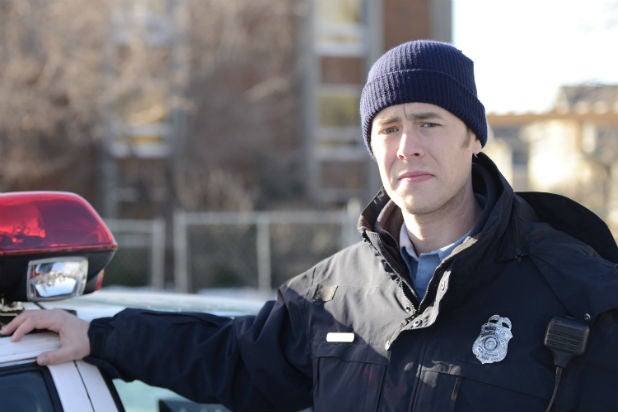 Colin Hanks featured heavily in the first season of FX’s “Fargo” — and even earned an Emmy nod for the role. Now he’s weighing in on the creative shift of Season 2, which flashes back to 1979 with an all-new setting and cast.

“The idea of being able to tell one specific story for 10 episodes and then going to another time and telling a different story is very compelling,” Hanks told TheWrap before dropping the puck at the recent Los Angeles Kings hockey game to celebrate the Season 1 DVD release.

“That is why the first season was so good. If it just kept going on and on, it would be called “CSI: Fargo.”

Hanks, who played officer Gus Grimly in the dark comedy inspired by the 1996 Coen brothers film, said the charm of the series goes back to Ethan and Joel Coen‘s directorial talents. “They create these incredibly rich stories and worlds that are realistic but a little off kilter so they are still believable. The way that they set up ‘Fargo’ like it was based on a true story — which it isn’t, it is all fiction — means you can pretty much do whatever you want and people will say ‘obviously this happened.'”

Rather than letting the story lines of murder and malice in a sleepy Minnesota town roll on indefinitely, it was smart of series creator Noah Hawley to create a “beginning, middle and end,” he said.

Set in Sioux Falls, South Dakota, which was often mentioned during the first season, Season 2 will feature a young Lou Solverson (played by Keith Carradine in Season 1) as the father of Allison Tolman’s character, Molly Solverson. “I don’t know who is going to be playing the young Molly or Lou, but I am really curious about who they choose,” said Hanks, adding: “I am not too up to date on child actresses under five years old.”

Premiering in April 2014, “Fargo” was ahead of when it came to movies-to-TV adaptations, which is a currently a hot trend in Hollywood. Fox acquired a half-hour comedy loosely based on the 1988 Tom Hanks film “Big” last month, but Colin is not looking to revive his father’s beloved role. When asked who should play the lead, he replied: “Anybody but me! I don’t know … I wish them all nothing but luck.”

The actor, who recently shot a guest role on “Mom” opposite Anna Faris as a man she meets “on a lonely Saturday night,” went on to dish about the recent flood of big screen successes heading to the small screen, such as “Marley & Me,” “Rush Hour,” “The Illusionist” and “Monster-In-Law.”

“It is not as simple as taking a movie and turning it into a hit TV show. You have to have a specific movie in mind and a specific way to bring it to life,” he explained. “That is one of the reasons why ‘Fargo’ was as successful as it was because Warren Littlefield, Noah Hawley and FX all had a very specific goal and artistic vision in mind, it wasn’t a carbon-copy. It has to be familiar but also stand out on its own.”

As for what film he would like to see remade, “Maybe a ‘Dazed and Confused’ series would be cool, it can’t just be the last day of school for every episode,” said Hanks.

He won’t be seen in “Fargo’s” sophomore season, but Hanks will no doubt be a common sight at the Kings’ NHL games this year, as his favorite team defends its Stanley Cup championship title. “I am excited, it is very early in the season but I am happy that hockey is back,” he gushed, while wearing his latest lucky Kings hat. “I have been a fan since 1986 when I just went to my first game. My dad used to watch up in Northern California when the Oakland Golden Seals played up there.”