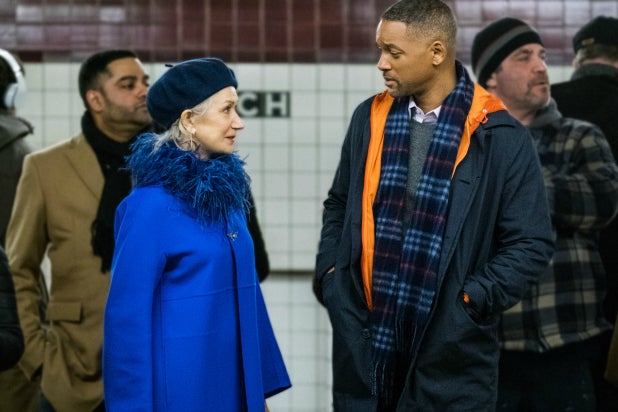 Critics are saying Will Smith should be picking better movies following his latest drama, “Collateral Beauty.”

“This horrifyingly yucky, toxically cutesy ensemble dramedy creates a Chernobyl atmosphere of manipulative sentimentality, topped off with an ending which M Night Shyamalan might reject as too ridiculous,” wrote The Guardian’s Peter Bradshaw.

TheWrap’s film critic Dan Callahan wrote, “An all-star cast submits to flagrant actor abuse in “Collateral Beauty,” which is every bit as lame as its title.”

The drama follows a successful New York advertising exec (Smith) who experiences a personal tragedy and retreats from life, only to have his colleagues come up with a plan to bring him back. Along the way he encounters people representing time, love and death. David Frankel directed.

Read seven of the harshest reviews below.

Will Ashton, The Playlist:
“Manipulative and over-engineered, starring high-profile actors doing all they can [to] elicit deep compassion, ‘Collateral Beauty’ fails to make an impression, and contains not nearly enough authentic beauty to make it worthwhile.”

Jude Dry, IndieWire:
“Seeing Smith play a failed father calls to mind the similarly heavy-handed ‘The Pursuit of Happyness,’ the 2006 film that earned Smith an Oscar nomination that year. That movie at least tackled the somewhat noble goal of depicting the true story of a man struggling to raise himself out of poverty and homelessness. With the bizarre way Whit and his crew talk about numbers and money, ‘Collateral Beauty’ is just another story about spoiled rich people.”

Sandy Cohen, Associated Press:
“With its cast of Oscar-caliber actors and pervasive theme of loss, ‘Collateral Beauty’ should have been a deeply moving tear-jerker. Instead, it comes off as a melodramatic contrivance. It’s unfortunate — not just because it’s a waste of an incredibly talented ensemble, but because the film has a worthy goal: highlighting the human need for connection by exploring universal concepts of love, death and time. But it undermines itself by mixing in greedy manipulation, a forced magical element and a painfully precious ending that makes any meaningful message evaporate before the closing credits roll.”

Leah Greenblatt, Entertainment Weekly:
“These actors are too good to be entirely sunk by the sheer silliness of the material (with the exception of Smith, who seems fully committed to playing the role of a human frown-face emoji). But for all good Intentions, they can’t save a movie that so clearly wants to be something greater — It’s a Will-derful Life? Grief, Actually? — but mostly ends up a Collateral mess.”

Stephen Whitty, New York Daily News:
“Keira Knightley has turned into a parody of herself — eyes perpetually wide and sideways, mouth slightly open. Really, she has one expression throughout the entire movie: Embarrassed disbelief. Perhaps that was her reaction to reading the script. Everyone else here, though, pretty much has their eyes focused on their paychecks. Although not as closely, perhaps, as unlucky audiences will be eying the exits — or Will Smith should be looking for better movies.”

Rafer Guzman, Newsday:
“An excellent cast, immersed in a hot tub of self-pity and false sentiment … None of these characters feels real; each one is a teardrop waiting to be wrung from your duct. And given this film’s air of yuppie magic realism, it’s no surprise that some of them turn out to be angels, or fictions, or something equally vague. Fortunately, by then ‘Collateral Beauty’ will have moved itself so deeply that you won’t need to feel anything at all.”