It was as sweet as can be — especially the hug(s) he and longtime sidekick Andy Richter shared. O’Brien’s tribute to his other better half wasn’t half bad either. 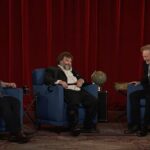 Also Read:
Jack Black Got Hurt for Real While Pretending to Be Hurt in ‘Conan’ Final Episode Gag (Video)

The “School of Rock” star came out on stage during Thursday night’s series finale wearing a cast and using a cane — and visibly wincing as he hobbled over to his seat. After some chit chat where Black explained how much he’s always appreciated and respected Conan, who was one of the first people to have him as a guest on a late night show decades ago, Conan got Black to explain what was up.

It turns out they had a big concept planned for O’Brien’s final show.

“We came up with this musical number that was gonna involve a lot of like, physicality, and I was gonna get injured in the middle of the musical” — “Fake an injury,” O’Brien interjected — “Fake an injury,” Black continued. “And then the paramedics were gonna come in, take me on a gurney out to the ambulance.”

At that point, Black said, he was supposed to scream “Hell no, I love Conan too much” and rip off his medical accoutrements and run back to the theater where they’ve been taping the show. The gag was so developed they were actually in the process of filming it on Wednesday, and did multiple takes. And during one of those takes, while running, Black twisted his ankle.

Conan then explained how he ran out to help and tried to get the EMT workers in the ambulance they had for the shoot to help, only to be repeatedly reminded that the EMTs were actors and the ambulance wasn’t a real ambulance.

“I was so bummed because I wanted to be THE BEST GUEST of all time for your final show and instead, I am literally the lamest,” Black added, causing O’Brien to crack up.

The “Conan” farewell — and Conan’s farewell — got a bit more sincere from there.

He wrapped up his legendary run with a simple “goodnight” and “thank you very much!” One more hug with Richter and the 11-year “Conan” run was over.

That doesn’t mean you won’t see O’Brien anymore. Conan is shifting from one WarnerMedia platform, TBS, to another, HBO Max. While we don’t have many details yet on his new project, we can assure readers that it will not be nightly.