Conan O’Brien may have stolen the show at Sunday night’s Emmy awards despite only getting on stage once. This year, the late night host’s shining moment came during an off-stage moment, when he trolled Frank Scherma, chairman and CEO of the Television Academy.

As Scherma took the stage to introduce and present the winner of this year’s Governor’s Award, O’Brien made sure to give him a passionate standing ovation. He applauded longer than anyone in the room — in fact prompting a second round of applause for Scherma — screamed as loud as he possibly could, and proudly saluted the man.

Scherma, for his part, took things in stride, and the room laughed along (including O’Brien’s fellow late night hosts Stephen Colbert and John Oliver). Meanwhile, Twitter absolutely blew up, with most people applauding the stunt.

That said, some people weren’t quite amused by O’Brien’s timing. Considering the Governor’s Award was being presented to Debbie Allen, a Black woman, and one of only a few people of colors who won an award on the night, many criticized O’Brien for detracting from such an important moment.

“What exactly was Conan doing? The speech was about diversity and honoring Debbie Allen. So whatever he was doing was such a distraction. Not the time,” Ashley Carter, an Orlando news reporter, tweeted.

Still, many people seemed to agree that O’Brien was solely trying to heckle Frank Scherma, not take anything away from Debbie Allen. 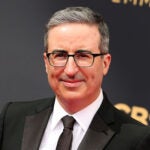 And, as folks on Twitter are prone to do, the late night host was almost immediately turned into a meme on Twitter — or at least a starting point for one.

You can check out more reactions to Conan O’Brien’s Emmys antics below.