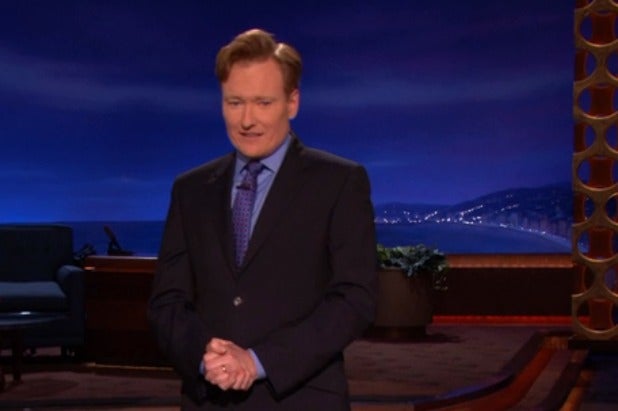 Conan O’Brien and TBS announced Wednesday that he has re-upped his contract with the network through 2018, and O’Brien noted that the new contract will take him into his 26th year as a late-night host.

“I’ve gone from, ‘Who is this young punk?’ to ‘Oh my God, what has he done with his eyes?'” O’Brien said at Turner’s upfront presentation to advertisers Wednesday. “‘I think he got the full Pelosi… Conan looks like Bruce Jenner’s mother.'”

O’Brien was, as usual, in self-deprecating mode. But he also had jokes about Solange Knowles, TNT and TBS president Michael Wright, and Steve Carell. Here are the best:

“Once again I’m only here because I was told The Rock would be appearing personally. That happened last year and they sent video once again. Here’s the kicker: I saw him on the street 10 minutes ago. He was on a bike. … I flew 9,000 miles to be here.”

“I’m sorry if I look a little disheveled. To get here I flew all night, then took an elevator with Beyonce’s sister.”

“This is our first year doing an upfront at Madison Square Garden. The Ringling Bros. circus was just here but somehow we’re managing to pile the shit up even higher today.”

“I’m thrilled that TBS is in the capable hands of Michael Wright. Michael’s an actor who’s best known for what he has accomplished outside acting. Just like John Wilkes Booth. I’ll stand by that joke: He’s a murderer.”

“Michael’s an important member of the Turner team. Not only is he a respected leader and executive. He’s the only one who knows which one is Rizzoli, and which one is Isles.”

“Of course Michael Wright is here to promote his own sitcom about an Asian couple that adopt him. That’s right, it’s called “Two Wongs Don’t Make a Wright.” … That just happened, ladies and gentlemen. I’m gonna give you reporters time to write that one down. This is a guy with a long-term deal.”

“Speaking of new shows, Michael picked up ‘Angie Tribeca,’ the new comedy created by Steve Carell. I’m very excited that Steve’s joining us here at TBS. I saw Steve backstage an hour ago. He was white as a ghost. He grabbed me and said, ‘I thought I signed with CBS.'”

“There was food at this thing last year, wasn’t there? That’s a sign we had a good year.”