Spanning eight films in total, “The Conjuring” franchise is as vast as it is confusing. The story that kicked off with supernatural investigating couple Lorraine (Vera Farmiga) and Ed Warren (Patrick Wilson) has since expanded into a series of “Conjuring” movies and spinoffs, all set at different points in a timeline that begins all the way back in the 1300s. The events in the three proper “Conjuring” films actually do occur in the order they were released, but the spinoffs and prequels, including “The Nun” and the “Annabelle” films, make the timeline much more complicated.

Here’s how to watch all the “Conjuring” movies in chronological order, all the way back to the Dark Ages.

While the bulk of the film about the Nun (aka Valak), who first appears in “The Conjuring 2,” is set in 1952 Romania, a flashback tells us the origins of the demon. It was first conjured in the Dark Ages by a Satan worshiper who built the Romanian abbey. He was defeated by Templar Knights, who trapped Valak until some nuns accidentally set it free it four centuries later. Since the real Carta Monastery was built in the 1200s and the Templars were disbanded in 1312, Valak probably made his unholy debut in the 13th or 14th century. The final scene connects this prequel to the world of the Warrens in 1971.

“Annabelle: Creation’ shows how the creepy, pig-tailed doll came to be. In 1943, a toy maker creates it after the accidental death of his young daughter. The story then shifts to 1945, when he opens his home to shelter a nun and six parentless girls after the local orphanage shuts down. One of the girls named Janice (Talitha Bateman) becomes possessed by Annabelle. After Janice survives the subsequent mayhem, she changes her name to Annabelle and is adopted by the Higgins. In 1967, she returns to murder her adoptive parents.

While the events of “Annabelle: Creation” technically take place before the bulk of “The Nun,” we’re putting “The Nun” first because of the key flashback in that film.

The first Annabelle spinoff about the cursed plaything is set just before the events of “The Conjuring” kick off. Although there really was an Annabelle doll, and the real Warrens took it home with them to their spooky room of haunted objects, the horrific events of this film do not jibe with the real story.

The film that started the saga of the Warrens begins in 1968 with the Annabelle intervention, but most of the movie is set in 1971. The story begins in 1863 when the witch Bathsheba killed herself after sacrificing her baby to the devil, but the film remains firmly in the 20th century as she preys on vulnerable families.

This film, in which the demonic doll wreaks all kinds of havoc at the Warrens’ house after a nosy friend of their daughter foolishly removes it from its case, is set in 1972.

The curse begins in 1673 when a mother in Mexico drowns her two sons, giving birth to the legend of the Weeping Woman, who is seeking living children to replace her own. Cut to 1973, caseworker Anna Tate-Garcia (Linda Cardellini) recruits former priest Rafael Olvera (Raymond Cruz) to stop the malevolent spirit from taking Anna’s kids next.

The real-life haunting (or hoax, depending on your standpoint) happened in England in 1974. Before the Warrens head to London, they briefly investigate the Ronald DeFeo Jr. murders in Amityville, New York, which as any horror fan knows, inspired the still-active Amityville franchise.

The third proper “Conjuring” installment was inspired by the 1981 trial of Arne Cheyenne Johnson, who was the first person to claim demonic possession as a legal defense.

Where Are “The Conjuring” Movies Streaming?

“The Conjuring 2” is also streaming on Netflix.

“The Nun” is not currently streaming, but is available to rent. 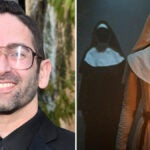