For Hulu’s “Conversations with Friends,” Joe Alwyn plays Nick Conway, a 31-year-old married man who is trying to learn to trust his wife again after she cheats on him. But then he meets Frances (Alison Oliver), a 21-year-old college studentnd, and so begins his own affair.

The relationships in the streamer’s latest Sally Rooney book adaptation are anything but clear cut. They bring the characters joy and excitement, while also causing heartache and pain. There are a lot of dynamics at play, including the fact that there is a 10-year age gap (and a lot of life experience) separating the two at the center of it all.

However, Alwyn and Oliver agreed that the power dynamics in their on-screen romance aren’t so impacted by that age difference. Rather, there were a lot of other forces at play.

“I don’t think it’s as clear-cut as who has the power basically between the two of them. In fact, often, Frances might, from his perspective, he might feel like she has more power than he does,” Alwyn told TheWrap. “So I think the age thing is interesting. It’s there, but it doesn’t feel like it’s something that was really heavily lent into as part of the story. For me, that’s what I felt anyway.” 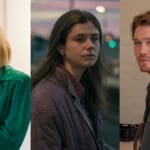 Oliver agreed: “It does shift and change, and I think that relationship is so up and down and up and down. They can both feel like at separate times, you know, ‘He has all the power and now I feel like I have the power’ — like that is the thing that comes up a lot, but I guess we never wanted it to feel like he was ever exploiting that or manipulating her.”

From the moment they meet, it is as if Frances and Nick are willing to incur any consequence in order to be together. No amount of pain caused to their loved ones seems to be reason enough to end their affair.

In Oliver’s mind, the characters were coming from a place of vulnerability, which ultimately led to their feverish romance. And in a state like that, it’s almost as if there was no room for logic.

“I think when you meet both of them in their own kind of way, they’re both in a vulnerable place in their life,” Oliver explained to TheWrap. “Nick is coming from a place of recovery, and I think Frances definitely feels like she exists in Bobbi’s shadow a little bit. So I think when they meet each other, having that kind of connection is really kind of exciting for them and also quite validating.” 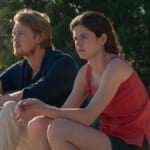 That, Oliver adds, trumps all else. (Her character Alison even admits it in the series, saying at one point: “I don’t think I thought about the reality or consequences.”)

“So as much as what they embark on does cause mess and does cause chaos, I think it’s coming from a place of desire or need to feel loved or accepted,” Oliver said. “I guess they’re feeling like they’re really finding that in the other person.”