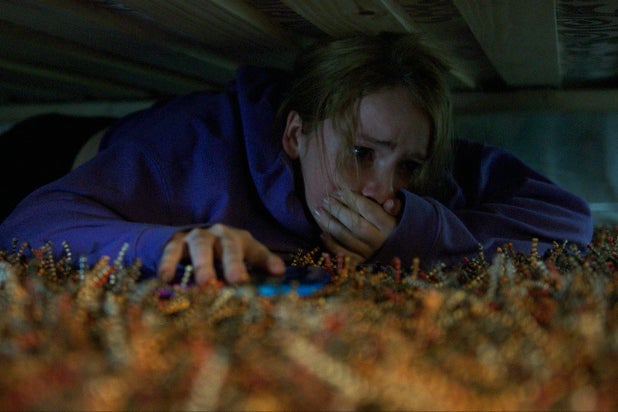 It takes almost half the film to figure out if Justin Dec’s directorial debut, “Countdown,” is seriously being serious. The film aspires to belong in the small but noteworthy horror subgenre about killer curses, right alongside Jacques Tourneur’s “Night of the Demon” and Sam Raimi’s “Drag Me To Hell,” but this time it’s about a killer cell phone app. Yes, really.

The titular “Countdown” app is very simple: you download it to your phone, and it gives you a countdown that reveals when you’re going to die. Most people find out they’ve got decades left to live and go on about their days. But some people find out they’ve only got a few days, or even hours, so they freak out and try to change their destiny.

That’s when the demons come after you — when nobody’s looking, of course, and only in spooky hallways and bathrooms. Whether you meet your fate organically or at the hands of a monster, you are going to die when your countdown reaches zero. Every. Single. Time.

Of course, getting this app into the Apple Store must have been tricky, and beta testing it could only have been a nightmare. Just try imagine all those part-time employees logging morbid bug reports like “Countdown said Ricky would die at 4:30 p.m., but he actually flatlined at 4:29. MUST FIX.”

Yes, it sure is hard to take Dec’s film seriously. Which is why it’s a relief to discover that the movie knows it, too. “Countdown” begins as a laughable technophobic curse movie that takes itself too seriously, but it gradually gets weirder and sillier until there’s only one logical conclusion: It’s not laughable, it’s legitimately funny.

“Countdown” stars Elizabeth Lail (“You”) as Quinn Harris, a young nurse who comforts a deeply troubled patient who, thanks to that darned app, thinks he’s going to die in surgery. Quinn laughs it off as a gag, but when he tries to flee down a stairwell, he falls and dies under mysterious circumstances, exactly when his Countdown was up. And wouldn’t you know it? Quinn already downloaded the app herself, just yesterday, with all her friends, and it said she going to kick the bucket this weekend.

It gradually dawns on Quinn that the app is real, and that her death is imminent, so she embarks on the time-honored exercise in futility that is trying to escape her fate. She tries to delete the app, but the delete button doesn’t work. (Note to similar cyberhorror films like “Friend Request” and “Unfriended”: this isn’t nearly as shuddersome as you think it is.) Then she buys a new phone, without the app, but it downloads automatically onto the new one anyway. It’s an extremely annoying app. No wonder it has only 3 1/2 stars in the Apple store.

The film picks up steam after Quinn runs into another upcoming Countdown victim, Matt Monroe (Jordan Calloway, “Black Lightning”). Now Quinn finally has somebody who believes what she’s going through, and someone with whom she can discuss the curse’s bizarre rules and mechanics. At this point “Countdown” takes on an absurd new life. The dialogue gets funnier, and the film’s supporting cast expands to include a righteous a-hole of a tech guru (Tom Segura, “Instant Family”) and a whimsically enthusiastic demonologist (P.J. Byrne, “Rampage”), sending the film into thigh-slapping territory.

All of this is to say that “Countdown” starts out embarrassing but gets progressively more entertaining as time goes on, to the extent that you start to wonder if it was ever actually bad to begin with. Maybe it was always this quirky. And although that means it’s hard to get invested in the storyline and spooky set pieces (all the ghostly jump scares in the world don’t amount to a hill of beans if we know nobody can die until tomorrow), it also means we can all just sit back and have a little chuckle with this insubstantial but amusing piece of matinee nonsense.

Also Read: Halloween Horror Nights Review: Ghostbusters, Killer Klowns and the Tethered Compete to Scare the Hell Out of You

The film’s aesthetic sure seems to support the idea that the filmmakers knew what they were doing. The cinematography by Maxime Alexandre (“Crawl”) is slick and bright, like an affable sitcom, and the music selections are spry and dancy, which practically begs us to watch “Countdown” at home in a party atmosphere. Only an unpleasant sexual harassment subplot with Quinn’s boss, Dr. Sullivan (Peter Facinelli), ties “Countdown” into our ugly, real world. But even that’s mostly an excuse for the film to take all its aggressions out on him later, in a satisfying — yet, as always, quirky — climax.

In the end, the most “Countdown” can claim to be about is the importance of reading the terms of service whenever you download a new app to your phone, which is good advice but unlikely to give anybody panic nightmares. “Countdown” can never be taken seriously enough to work as a conventional horror thriller, and it’s never quite funny enough to be a great horror comedy. But it’s got just enough eccentricity and self-awareness to entertain despite those obvious deficiencies. There are worse ways to spend your time.