Steven Soderbergh‘s “Behind the Candelabra” dominated the Primetime Creative Arts Emmy Awards on Sunday night, but Bob Newhart was the man of the night with his first Emmy win in a television career that has lasted more than 50 years.

The Newhart victory, which came for his guest role on the comedy “The Big Bang Theory,” was the emotional high point on a near-four-hour show distinguished by harried winners trying to beat the clock, and by an upstart streaming service winning its first awards.

Newhart, Melissa Leo (“Louie”), Dan Bugatinsky (“Scandal”} and Carrie Preston (“The Good Wife”) won the guest acting awards, the highest-profile honors given out on a night that awarded 77 of the 101 Emmy categories. 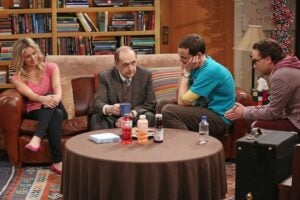 Bugatinsky beat Michael J. Fox and Nathan Lane from “The Good Wife” and Robert Morse and Harry Hamlin from “Mad Men,” and thanked both his onscreen husband and his real-life husband in an acceptance speech that also paid tribute to the U.S. Supreme Court.

But it was Soderbergh’s movie about the relationship between Liberace (Michael Douglas) and Scott Thorson (Matt Damon) that was the night’s big winner. Nominated in nine categories, it won the first eight times it came up, including art direction, casting, picture editing and costumes. It wasn’t until the final hour of the show that “Candelabra” finally lost, when “Top of the Lake” won the cinematography award for movies or miniseries.

The “Candelabra” cinematographer who was the movie’s first loser was Soderbergh himself, using the pseudonym Peter Andrews. Earlier in the night, he had won for picture editing under another alias, Mary Ann Bernard, but had not been present to accept.

As usual, HBO was the big winner among networks, with 20 awards to 15 for CBS and eight for NBC.

Other winners included Lily Tomlin, who won her first Emmy in 32 years for her narration on the HBO movie “An Apology to Elephants,” and Heidi Klum and Tim Gunn, who won the reality-host award for “Project Runway.”

“Undercover Boss” was named Outstanding Reality Program for the second year in a row.

The first award of the night went to Netflix’s “House of Cards” for casting, but the innovative series did not get back to the stage of the Nokia Theatre until near the end of the night, when it won for cinematography.

Composer and songwriter Alan Menken would have completed the Emmy-Grammy-Oscar-Tony grand slam known as the EGOT if he had won for a song he wrote for the TV series “The Neighbors,” but he lost to a song from the Tony Awards.

On a night when it stirred up lots of internet talk with one of its final episodes, “Breaking Bad” won a single Emmy, for editing.

With so many awards handed out, virtually all the winners were played off at the end of a 45-second countdown that began not when they reached the stage, but when their names were announced.

Given the inordinately long introductions by a few presenters – including Dan Harmon and Joel McHale, Gilbert Gottfried and Triumph the Insult Comic Dog – the lack of speech time grated on more than a few of those in attendance.

By the end of the show, winners hustling down the long aisles passed acres of empty seats on their way to the stage.

This year’s Creative Arts Emmys will be broadcast on the FXX Network on Saturday, Sept. 21 at 9:00 p.m. ET/PT, with an encore airing at midnight.

The Primetime Emmy Awards, which will present the remainder of the awards, including the top acting and show categories, will take place the following night and will be broadcast live.