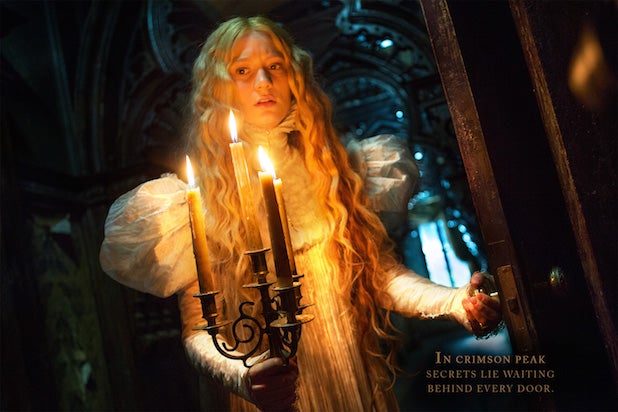 Guillermo del Toro‘s latest horror film “Crimson Peak” hits theaters this Friday, and while critics seem less than thrilled about its scares and often dull dialogue, they applaud the performances of the actors — particularly Jessica Chastain.

The badass lead in movies like “Zero Dark Thirty,” and more recently “The Martian,” revamps her repertoire in this film as she plays the icy-cold — and sometimes deranged — sister to Tom Hiddleston, who falls in love with naive Mia Wasikowska. Many critics agree that Chastain carries the film with her “icy stare.”

TheWrap’s film critic Alonso Duralde also praised Chastain, Wasikowska and Hiddleston, writing, “these actors have been called upon to play archetypes, and they do so brilliantly.”

But some reviews note that while the film boasts stellar sets, it features “overfamiliar elements,” is “overwritten” and is filled with “foreshadowing many viewers will see coming.” The visuals are “engrossing,” but the storyline is not terribly “engaging.” Ultimately, the film has racked up a score of 65 percent on Rotten Tomatoes.

“Mexican director Guillermo del Toro has built a reputation on his imagination: films like ‘Pan’s Labyrinth’ and ‘Hellboy II’ are crammed with eyeless demons and flesh-eating fairies, tangling fantasy and horror in intoxicating fashion. So it’s a surprise — and a shame — to report that his new film ‘Crimson Peak’, while often entertaining, feels like a mish-mash of overfamiliar elements, falling way short in the wild, weird, what-the-fuck-was-that department.”

“Chastain’s performance — icy-cold, unblinking and perpetually teetering on the edge of deranged — is a highlight … The other leads can’t match Chastain’s intensity, however, even though Del Toro and co-writer Matthew Robbins give Wasikowska plenty to do by inverting the damsel-in-distress trope … Like many of the themes, this inversion is conveyed so deliberately it comes across as overwritten, and the script is laden with heavy-handed foreshadowing and a psychosexual twist many viewers will see coming long before it happens.”

“The prestige cast is a good one, and mostly fun to watch, even if Chastain could stand to dial down her Lady Macbeth-like performance, say from 11 to a more reasonable 7 or 8. And the art direction (by Brandt Gordon) is impressive.

But “Crimson Peak” feels less like a Gothic romance or supernatural mystery, as it’s being touted by its marketers, than a costume version of “Scream,” dressed up in crinoline and top hats. Maybe somewhere in the creative process the plan was to make a period ghost story. It’s not a bad idea, in an age in which restraint and subtlety are routinely left out of scary movies. But the old-fashioned good intentions of “Crimson Peak,” like the house at the center of the film, quickly get swallowed up by puddles of bright red goo.”

“It offers astonishing and gorgeous production design in regards to its title location, and gorgeous movie stars at the helm. That will be enough for some viewers, but the story it tells is painfully straightforward, unfortunately, telegraphed and not terribly engrossing. And the notion that the film is intended to be a gothic romance is stifled by the clearly laid out knowledge, presented early on, that its core relationship is founded on false pretenses and with ill-intent. The set-up is engaging and vibrant, but once we get to the big scary house, the entire movie becomes a waiting game for our heroine to finally catch up with where most viewers were by the end of the first or second reel.”

“Chastain is a fabulous monster. The first time we see her, she’s disrupting a cocktail party in a red silk dress with a spiny back and scales. Later, she feeds a butterfly to ants — del Toro zooms in on the nest devouring its eye — and, later still, manages to scare us while squeezing a fistful of scrambled eggs. By the time Chastain scrapes a spoon against a bowl of porridge with the scrrrrawwwwp of nails on a chalkboard, she has us in nervous, fearful giggles. It’s the first fun role Chastain has had in years. Keep them coming.”

Also Read: Can Jack Black's 'Goosebumps,' Tom Hanks' 'Bridge of Spies' Bring 'The Martian' Back Down to Earth?

“Though some of the dialogue in ‘Crimson Peak’ sounds false or stilted … the bald-faced artifice is part of the movie’s appeal. There’s a continual sense of deconstruction to each step of this fairly predictable plot, right down to the payoff of the crimson-soaked finale. Above all, with Chastain’s icy stare pitted against Wasikowska’s developing confidence, del Toro has made a feminist inversion of the usual gothic formula in which male desires wind up animating the behavior of the female characters. In another noticeable challenge to Hollywood conventions, ‘Crimson Peak’ lets the ladies run the show, and their final showdown doesn’t disappoint.”

“Del Toro needs balance, but he can only do extremes. Indeed, his films toggle between two speeds: incredibly busy (usually his Hollywood turns, like ‘Hellboy II’ and ‘Pacific Rim’) and glacial and moody (typically those not in English, such as ‘The Devil’s Backbone’ and ‘Pan’s Labyrinth’). ‘Crimson Peak’ is a Hollywood extravaganza, with awe-inspiring sets and first-rate ghosts, but it’s definitely one of the latter.”

“A huge part of why the film works as an effective throwback to period dramas of the past is the fact that the main trio of Mia Wasikowska, Tom Hiddleston and Jessica Chastain are such great actors that they understand how to pay homage to the past without mocking it. In inferior hands, the brooding and dreadful air about these characters would be reduced to a series of awkward looks. But ‘Crimson Peak’ does not throw away any character, any line, or any frame of film in its quest to scare the hell out of you — while breaking your heart at the same time.”

“The rich atmosphere of ‘Crimson Peak’ never wanes, but the story does. Having summoned the gothic ghosts, Del Toro never fully unleashes them. The director’s dark fantasy masterpiece remains ‘Pan’s Labyrinth,’ but his affection for gothic romance is infectious; hopefully he has a Dickens adaptation in him.”