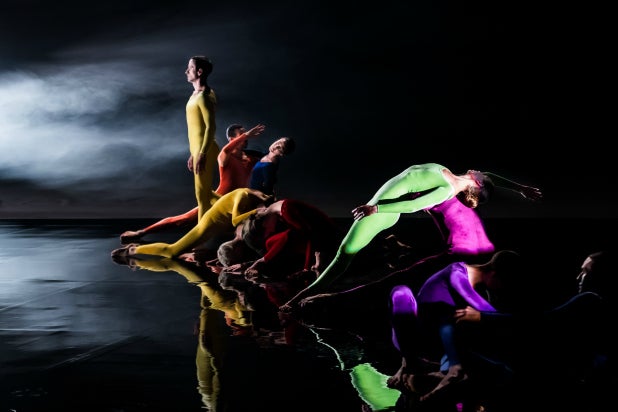 Alla Kovgan’s “Cunningham” is a documentary that stages excerpts from some of Merce Cunningham’s most representative dances in 3D, and these 3D dances take up about one third of the film’s 90-minute running time. They are often exciting but sometimes frustrating, and Cunningham himself makes for an enigmatic subject.

Cunningham made dances that were built around an ideal of freedom and possibility — one of his favorite words — but with dark underpinnings. He rehearsed them without music, and he was not too interested in costumes or sets. Cunningham was dedicated to pure movement, which meant that he was not concerned with what his dances could mean to others on the level of interpretation or narrative; his best work involves a series of movements so unexpected that they cause a kind of jolt to the senses.

Before he died in 2009, Cunningham left behind templates for how his dances might go forward without him. He always embraced new technology, and so Kovgan’s attempts to immerse us in his dances on film would likely have met with his approval. Cunningham disregarded the conventions of the proscenium arch and liked to stage his dances in the round.

For one of his most famous dances, “Summerspace,” he utilized a pointillist painting by Robert Rauschenberg on both the floor and the back wall of the stage, and dot costumes so that his camouflaged dancers looked like birds moving from branch to branch in a jungle. Kovgan shoots this dance so that we are in this color jungle with them, and this is very effective.

Though Kovgan often has to confine the dancers within a certain frame, the 3D technology does help her to expand that framework for “RainForest,” which is danced amid floating silver pillows designed by Andy Warhol and sexy flesh-colored costumes by Jasper Johns with strategic holes that make the bodies look like they are rotting in outer space.

These two dances are triumphs for Kovgan, but not all the others are as successful. Cunningham loved wide perspectives, which is why he enjoyed staging some of his dances outdoors, and while he probably would have been happy for us to see some of his dances from above in overhead shots, Kovgan overuses this device. The movements of the dancers here are often startlingly expressive, with particular emphasis on sliding across the floor and sinuously unexpected torso gyrations, but there are times when shadows and camera movement obscure what we could be seeing of them.

Kovgan is discreet when it comes to the sections of the film dealing with Cunningham’s personal life and his hard struggle for acceptance over a 25-year period from the early 1940s to the mid-1960s, when his choreography finally began to be acclaimed. We hear his rather foreboding, halting voice on the soundtrack and see a few love letters from his long-time romantic partner and collaborator John Cage, a composer who notoriously pushed against the boundaries of musical forms. Both Cage and Cunningham were devoted to chance, and so Cunningham would often determine aspects of his dances by flipping a coin.

Cunningham was a shy man, and he gave his dancers an unusual amount of freedom; he wanted them to bring who they were as people to his work, and he thought even their technical flaws could be used creatively. When he finally established a home base for his company in the early 1970s, Cunningham was asked if he felt like a patriarch to his new troupe of dancers, and he said, “No, I feel like a bystander who’s been trapped.”

The very reserved Cunningham could be looked at as the anti-Balanchine, because he did not want to control his dancers but instead to bring out their individuality, and this generosity has been carried on in the work of Mark Morris, who is about as unreserved a man as can be imagined. Another filmmaker might have traced some of the greatness of Cunningham’s choreography and democratic perspective to his sexuality — his hidden gentleness allowed him to create some of the most incisive male-female partner dances — but by filming the dance excerpts in 3D, Kovgan already has her work cut out for her.

“Cunningham” is valuable as an introduction to the work of this major artist, who is sometimes seen dancing himself in archival footage, unfurling his long legs and arms and exploring the most eccentric movements without fear or physical roadblocks of any kind. In many ways, Cunningham was an exemplary artist and man, recessive and charitable in life and calmly revolutionary in his work, which is so strong that it does not need his continuing presence on earth to go on living on stage, and now on screen.