Cuomo will leave office at 11:59 p.m. ET Monday night, two weeks after announcing his plans to abdicate his role. Earlier this month, state Attorney General Letitia James announced that her office had found Cuomo sexually harassed at least 11 women. He initially declined to resign, but heavyweight political figures like President Joe Biden publicly said he should.

Cuomo maintains he did not touch anyone inappropriately but said upon his resignation that it is for the good of New Yorkers, because the investigation and findings have caused such drama: “I think that given the circumstances the best way I can help now is if I step aside and let government get back to government, and therefore that is what I’ll do, because I work for you, and doing the right thing, is doing the right thing for you.” 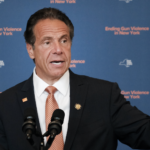 “The attorney general’s report was designed to be a political firecracker on an explosive topic and it worked. There was a political and media stampede,” the third-term Democrat said in the address Monday.

Watch his farewell address above.