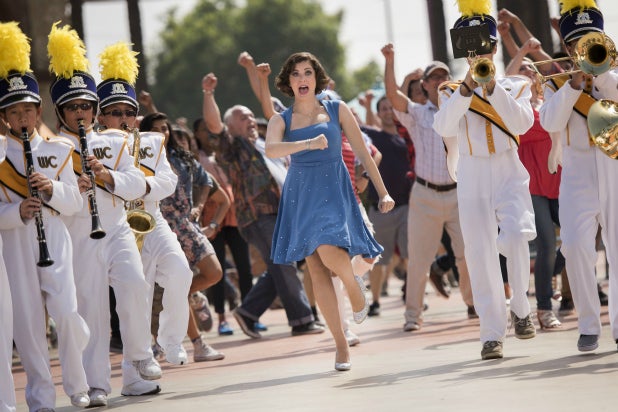 “Crazy Ex-Girlfriend” was the only new show to premiere on the CW last fall, an offbeat choice the network slated to follow the critically beloved sophomore series “Jane the Virgin.” And now that the show has completed its first season, could the ratings-challenged musical dramedy be a serious Emmy contender?

The series, co-created by and starring Rachel Bloom, aired its season finale on Monday to generally positive reviews and fan reactions, but an audience of just 840,000 viewers and a 0.3 rating among adults 18-49.

That’s generally in line with the rest of the “Crazy Ex-Girlfriend’s” run: a small, but die-hard audience generating buzz for the series online and critics singing its praises as the show continues to struggle in the ratings. (As a vote of confidence, the network has already renewed the series for a second season; the season 1 finale was earlier this month.)

The show’s semi-cult status has already translated to some awards recognition. In January, Bloom took home a Golden Globe for her role as the obsessive Rebecca Bunch, a former New York lawyer who moves across the country in pursuit of her childhood love. She also beat out her peers at the Critics Choice Awards that same month.

If that momentum carries over to the Emmy nominations — the first round of voting begins in June — Bloom might again find herself with better luck than the show itself.

While the comedy series category is packed with past nominees and winners (“Veep,” “Modern Family,” “Girls,” “Unbreakable Kimmy Schmidt,” “Transparent,” etc.), three of last year’s nominees for lead actress in a comedy are no longer in the running. Amy Poehler of “Parks and Recreation,” Edie Falco of “Nurse Jackie” and Lisa Kudrow of “The Comeback” were all nominated in 2015 for their respective shows’ final season, leaving a lot of room for new faces come September.

Assuming Julia Louis-Dreyfus, Amy Schumer and Lily Tomlin repeat their nominations from last year, Bloom could still face some stiff competition for those three other spots. The previously nominated Lena Dunham might break back in following the critical resurgence of “Girls” this season, and Ellie Kemper, star of the zeitgeisty “Unbreakable Kimmy Schmidt,” is another likely nominee given the Netflix comedy’s nod last year.

ABC matriarchs Constance Wu of “Fresh off the Boat” and Tracee Ellis Ross of “black-ish”; “Broad City” duo Ilana Glazer and Abbi Jacobson; “You’re the Worst’s” Aya Cash; and fellow CW star Rodriguez are also in contention and could all conceivably give Bloom a run for her money.

But a nomination for either “Crazy Ex” or Bloom herself would be a huge win for the CW. The network hasn’t received any major Emmy nominations in its ten years on the the air, and following last year’s snubs for Rodriguez and “Jane the Virgin,” the network is looking to finally break that streak.

Stay tuned to TheWrap for more EMMY BUZZ about your favorite shows.