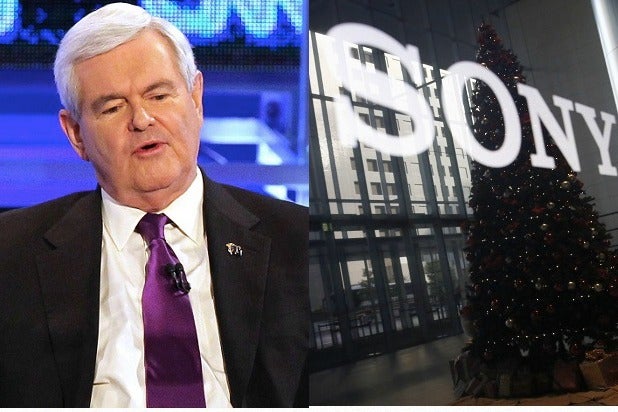 Outrage toward Sony didn’t reside just in Hollywood on Wednesday, as Washington D.C. heavyweights also lashed out at the movie studio for canceling “The Interview.”

Newt Gingrich, who self-labeled himself an American historian during his 2012 presidential run, marked Sony caving in response to the hack attack as a historic first in American history.

No one should kid themselves. With the Sony collapse America has lost its first cyberwar. This is a very very dangerous precedent.

.@RobLowe it wasn’t the hackers who won, it was the terrorists and almost certainly the North Korean dictatorship, this was an act of war

The most recent Republican nominee for president also took on Sony:

Congressman Peter King, who yesterday said even though he’s not a “big movie guy,” would go to theaters to watch “The Interview” in defiance of North Korea, weighed in Thursday:

Also read: Rep Peter King Not a ‘Big Movie Guy’ But Will Head to Theaters to Defy Sony Hackers (Video)

There r many things in movies I find offensive but in free society we have the right to show & make the films we want http://t.co/5Er5WJAu5R

And in an appearance on “CBS This Morning” Thursday, former Secretary of State Colin Powell, took a more measured tone than the aforementioned politicos.

“It’s a very serious issue. But you know this is a problem that all of us have to face in this Internet age,” he said.

“But if we can identify that the North Koreans did it and if we can be specific about who did it within North Korea, then I think appropriate action has to be taken. I can’t tell you what that appropriate action is. We are rather limited in what we can do to North Korea that we haven’t already done, but I’ll wait and see what the administration announces and then we’ll go from there,” said Powell.