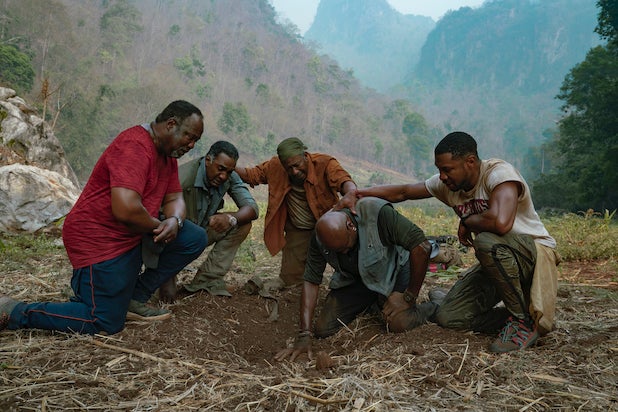 Spike Lee’s “Da 5 Bloods,” his first feature since the Oscar-winning “BlacKkKlansman,” is an angry, incendiary and extraordinarily timely film that surveys decades of racism in the United States with a sharp, unflinching eye.

And “Da 5 Bloods” is also an adventure story about a quartet of Vietnam vets who return to the country where they once fought to find the remains of their squad leader, and also dig up some buried treasure that they left behind in 1968.

One of those things is significantly more involving than the other, and you probably don’t need much help figuring out which one it is. The in-country trek at the heart of the film is pretty routine by Lee’s standards; it’s the way he tells that story, the asides and the history lessons and the cutaways and the tricks that have become the director’s singular cinematic vocabulary, that make it a must-see in these stormy times.

Sprawling and expansive at more than two-and-a-half hours, “Da 5 Bloods” is Lee’s Vietnam epic, a journey up the river with more than a few nods to “Apocalypse Now.” (Wagner’s “Ride of the Valkyries” even shows up at one point.) The more it has on its mind, the better it is, because the vitality of Lee’s filmmaking lies not in the way he shows these guys hiking through the jungle but in all the other stuff he throws at us along the trail.

It doesn’t have the focus or the concentrated punch of “BlacKkKlansman” – but at a time of Black Lives Matter protests around the country, it feels urgent and even necessary, even in the nontheatrical Netflix release necessitated by coronavirus theater closings.

The film starts with Muhammad Ali in 1967 talking about why he refused to fight in Vietnam: “No Vietcong ever called me n—–.” That’s followed by a barrage of clips from the time – Malcolm X speaking, Tommie Smith and John Carlos protesting at the 1968 Olympics, the killings at Kent State – set to the strains of Marvin Gaye, whose sweet but outraged album “What’s Going On” is heard again and again throughout “Da 5 Bloods.”

When we arrive at the present day, it’s in the lobby of a swanky Saigon hotel, where four Vietnam vets are meeting for what seems to be the first time in years. Paul, Eddie, Otis and Melvin (played by Delroy Lindo, Norm Lewis, Clarke Peters and Isiah Whitlock Jr.) served together in the late ’60s, and left unfinished business behind in the remote Vietnamese countryside: the body of their commander, Norman, played in flashbacks by Chadwick Boseman, and a buried crate full of $17 million in gold bars that were to have been given by the U.S. government to the South Vietnamese for helping them fight the Vietcong.

The movie shifts abruptly from the present day to 1968, shifting into a tighter aspect ratio and more assertive war-movie music (from Terence Blanchard) as it does, but there’s little attempt to de-age the actors, much less replace them with younger doppelgangers. Even when it’s set 50 years ago, “Da 5 Bloods” is a movie about now – and besides, we don’t really want to take our eyes off Lindo, Lewis, Peters or Whitlock, or off Jonathan Majors (“The Last Black Man in San Francisco”) who shows up as David, Paul’s worried son.

Early on, David meets a young French woman played by Melaine Thierry, whose purpose for being in Vietnam – she’s working to locate unexploded land mines – means that we’ll never again feel comfortable watching any of these men walk across an open patch of land.

As they head off on their journey, the men mock movies like “Rambo,” which show fictionalized (and white) heroes refighting and winning the war; better, they say, to tell the story of real black heroes, both in Vietnam and back in the U.S. Lee obliges them to cutting to footage of the real heroes they’re talking about. Of course, he always returns to the story of his fictional heroes (or antiheroes), which began its life as a Danny Bilson/Paul De Meo script about white veterans before Lee and Kevin Wilmott gave it an overhaul.

The asides and cutaways give the film a messy vitality characteristic of Lee’s recent work, and insist that we never relax into “Da 5 Bloods” as an adventure story. Not that we’d want to – the pointed history lessons that sprinkled throughout the film are Lee’s version of doing what Norman tells his team at one point: “Ain’t nobody use our rage against us. We control our rage.”

Lee’s rage drives much of the film, in which the vets’ quest – finding the treasure and the body – is complicated by PTSD, guilt and fury at being sent into combat by country that doesn’t give you the rights you’re supposed to be fighting for overseas.

Those complications give the plot an edge, but the story still sags in its central section, when the flashbacks disappear for a while and the focus shifts to whether they’ll find what they’re looking for. When Lee is telling that story, he’s less interesting than when he’s spinning it, embroidering it and dancing around it.

Still, “Da 5 Bloods” is always involving – and Lindo’s monumental performance turns Paul, an embittered Trump supporter with ghosts he can’t face, into a figure out of a Shakespearean tragedy. In the homestretch, much of that performance is delivered straight into the camera, and the theatrical conceit is entirely in keeping with what’s come before – after all, these guys have had a habit of talking with all of them facing the camera for the whole movie.

It doesn’t feel real, but it feels true. And when the film after one character utters, “madness, madness” – Lee’s version, it seems, of Marlon Brando’s “the horror, the horror” from “Apocalypse Now” – it’s hard to disagree.