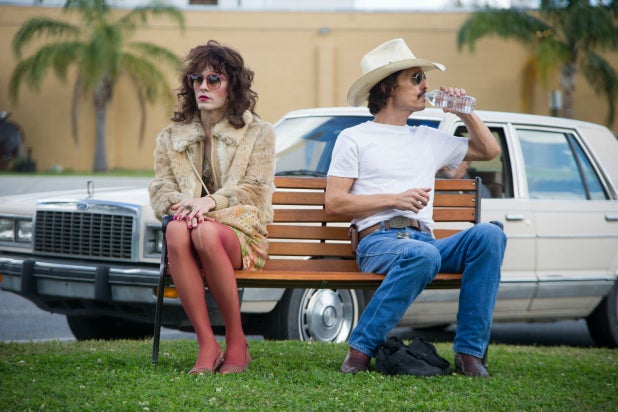 In the same way that television wasn’t ready for a mini-series called “Holocaust” until the 1970s, it’s taken three decades for filmmakers to tackle the devastating early years of the HIV/AIDS epidemic with any kind of historical perspective. On the heels of the acclaimed and powerful documentaries “We Were Here” and the Oscar-nominated “How to Survive a Plague,” we now get the docudrama “Dallas Buyers Club,” about one of many grassroots efforts to get non-FDA-approved drugs and supplements to terminally ill patients.

It’s been 20 years since “Philadelphia,” the last movie to feature a handsome, beloved movie star as a person with AIDS, and it doesn’t feel like mainstream cinema has gotten very far with the topic. If “Philadelphia” was the “Guess Who’s Coming to Dinner” of AIDS, “Dallas Buyers Club” proves that, all this time later, we’re still on the first course.

The movie is another powerful showcase for Matthew McConaughey, whose winning streak of excellent performances continues unabated, but his character and the way he plays him far outshines the rest of the film, which feels more “truthy” than true, with plenty of convenient composite characters and cardboard bad guys.

McConaughey stars as Ron Woodroof, a character who’s got nowhere to go but up from the film’s opening sequence, in which he has sex with a pair of floozies, unleashes a torrent of homophobic and racist insults, runs off with stolen betting money and punches his cop friend (played by Steve Zahn) in order to escape a mob of angry gamblers in police custody.

An accident at work sends Ron to the hospital, where blood tests indicate he’s HIV-positive and has almost no T-cells left. Doctors tell him he has 30 days to live, but Ron bribes a hospital janitor to steal AZT for him. That infamously toxic drug, which was for several years the only medication given to HIV/AIDS patients, nearly does him in, but an unlicensed MD (Griffin Dunne) in Mexico saves Ron with a regimen of unapproved medications, supplements and protein injections.

Realizing that terminal patients are starved for AZT alternatives, legal or not, Ron starts the Dallas Buyers Club; to avoid getting prosecuted for selling drugs, Ron gives them away — to the people who can afford the monthly membership dues. With the help of ailing drag queen Rayon (Jared Leto) and local doctor Eve (Jennifer Garner), Ron is able to offer new treatment possibilities to hundreds of clients, all under the watchful eye of the FDA.

This true story is a fascinating one, but writers Craig Borten and Melisa Wallack awkwardly dice the tale into such bite-sized nuggets that we’re basically left with one jerk doctor (Denis O’Hare) who keeps pushing AZT even when it’s obvious that it’s hurting patients and one dogged FDA bureaucrat (Michael O’Neill) who always seems to be hovering around Ron, whether it’s in Dallas or at the Mexican border. (Texas is really, really big, y’all, so it’s unlikely this one guy would have such a large jurisdiction.)

The best thing “Dallas Buyers Club” has to offer is Ron, both on paper and as portrayed by McConaughey. The script captures this good ol’ boy suddenly stricken with a disease he associates exclusively with gay men (there’s a prostitute-with-track-marks flashback), and as he goes through his journey, he doesn’t magically get cured of his small-mindedness. Apart from one scene where he physically forces one of his old friends to shake Rayon’s hand, Ron continually bristles at anything he perceives as gay; he just does it less so as the film goes on.

Admittedly, there’s something problematic about a movie featuring a hero of the AIDS crisis who’s a white, heterosexual male. But since HIV/AIDS has so often been portrayed as a problem of “others,” be they gays or people of color, there’s something almost subversive about playing it this safe, providing a hero who’s palatable to studio execs and then forcing him to live and work with people he has spent most of his life shunning.

Every character who isn’t Ron, alas, feels like an amalgam of several real-life people, and each one gets one or two defining traits apiece, if that. Leto pours his heart into playing a cross-dressing junkie, but the performance is ultimately too surface-level and self-satisfied; I know some Dallas drag queens, Mr. Leto, and you are no Dallas drag queen. (Leto does, it should be noted, strongly resemble Zooey Deschanel when wearing a brown curly wig and sunglasses.) Despite her own best efforts, Garner’s doctor comes off as little more than a plot device, despite some tacked-on flirtation scenes with Ron.

Like McConaughey’s recent “Killer Joe,” this is a Dallas-set movie filmed instead in the more tax-friendly climes of New Orleans, and there’s a definite lack of geographical specificity for a movie whose title proclaims its supposed location. Points, however, to the crew member who dug up an old T-shirt for GUTS (Gay Urban Truth Squad, Dallas’ version of ACT UP in the 1980s).

Yes, McConaughey lost a lot of weight for the role, but his work here transcends mere physical transformation. Whether he’s boozing and snorting his way through the Kübler-Ross stages (denial, anger, bargaining, et. al.) or disguising himself as a priest or a doctor to make his way through customs, the actor captures both the character’s shadiness and his dogged determination to go on living. (The real Woodruff outlasted his doctor’s 90-day prognosis by nearly 2500 days.)