Dan Rather published a lengthy blog post on Sunday lecturing Jon Stewart for his “dangerous” message on COVID-19 and science.

Last week, Stewart appeared on Stephen Colbert’s “Late Show” and where he theorized that COVID-19 originated from a laboratory in Wuhan, China. Stewart praised scientists for their tackling the pandemic, but added, “they are going to kill us all.”

Rather published a response titled “In Defense of Science” Sunday, excoriating the former “Daily Show” host. (A representative for Stewart did not immediately return a request for comment.) 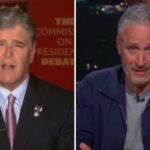 “I cannot overemphasize how dangerous this line of thinking is. It is true that some scientists have done some bad things in the name of research — such as the Tuskegee experiments. Scientists have been wrong. Science and technology have been tools that supported colonialism and oppression. Science does not release us from our moral responsibilities. All of this is the case because science is a human endeavor and scientists are human, subject to the same frailties and base instincts as any member of our species. But science is also a way of thinking, where we challenge our own dogmas and beliefs, where we change our minds and approach when the data show we were wrong,” wrote Rather.

The long-time journalist accused Stewart of “playing into the trope of the mad scientist at a time when we need science more than ever to solve our more pressing problems.” Rather warned that Stewart’s joke has deeper implications and gives clearance to those who want to dismiss science: “And I fear this reasoning – or should I say ‘unreasoning’ — has not only consumed the modern Republican party but is in danger of consuming an even broader swath of the American and global public.”