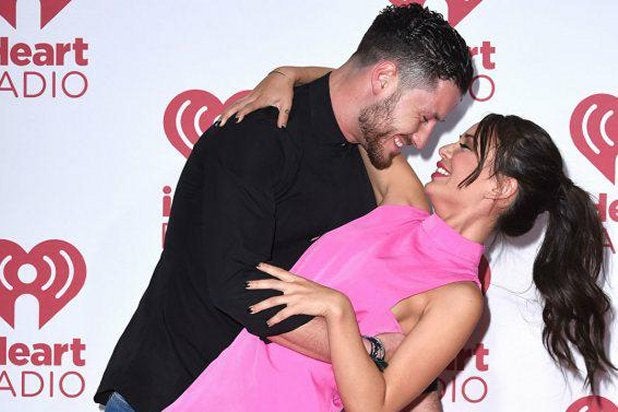 (Spoiler alert: Please do not read on if you have not yet seen Monday’s “Pitbull Night” episode of “Dancing With the Stars” on ABC)

It was Latin Night on ABC’s “Dancing With the Stars” on Monday, which meant lots of hip swivels and steamy gazes into one another’s eyes. But for one couple, could those gazes have even more meaning?

The show is certainly teasing the possibility of a real-life romance between “Pretty Little Liars” actress Janel Parrish and her partner Valentin Chmerkovskiy. It helps that they are also one of the strongest pairings in the competition, meaning this storyline — real or not — should have several more weeks in which to play out.

That said, this was not one of their strongest weeks. The couple matched last week’s 33-point score. If there is romance in the air, perhaps it’s causing distractions in the practice room. This is one of just three couples to have earned a perfect 40 this season from the judges.

The highest score this week went to Alfonso Ribeiro and Witney Carson, rebounding from last week’s 34 to score 39 points. Everyone else settled into the mid-30s, save for the regular performers who struggle to even reach 30 points in any given week. Michael Waltrip raised himself up from the bottom with 30 points, coming in just ahead of Tommy Chong and Antonio Sabato Jr., who each scored 28 points.

With no elimination last week, votes and judges’ scores were combined, leading to a more unpredictable result. Maybe-lovebirds Janel and Val were put in jeopardy first, joined by Jonathan Bennett with Allison Holker, and Michael Waltrip with Emma Slater.

Once again, NASCAR fans rallied and Waltrip found himself sent to safety. And so it was Jonathan and Allison who had to say farewell. As disappointing as the result must have been for them, it wasn’t too much of a shock for the viewers. Jonathan has struggled much of the season, coming in toward the back of the pack each week.

Also read: Leah Remini to Fill In for ‘Dancing With the Stars’ Co-Host Erin Andrews

The leaders are still doing well, but there are a few stragglers — or is that strugglers? — hanging in there. If one of them outlasts front-runners like Alfonso or Janel, then people will really be shocked.

The week also featured a couple of substitutions. Judge Len Goodman, who is expected to return next week, was again out and this time replaced by Pitbull, hence the night’s Latin theme. Meanwhile, as previously reported, former contestant Leah Remini stepped in as co-host for Erin Andrews, who was off covering the World Series on Fox.

The competition continues every Monday at 8 p.m. ET on ABC’s “Dancing With the Stars.”