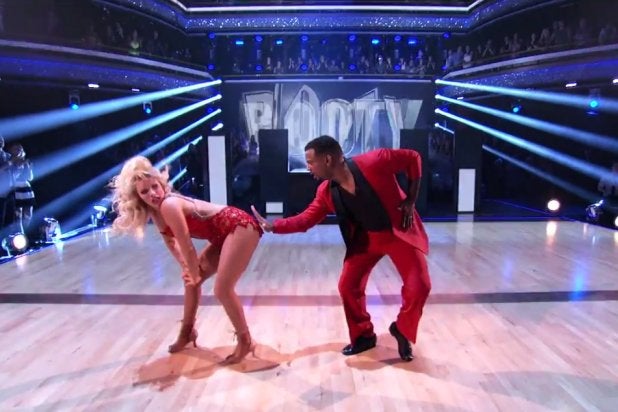 (Spoiler alert: Do not read on if you have not yet seen Monday’s “Pitbull Night” episode of ABC’s “Dancing With the Stars.”)

After an off week, Alfonso Ribeiro took command again in a “Dancing With the Stars” season that has really come down to him against the ladies. None of the other guys remaining in the competition can hold a candle to the “Fresh Prince of Bel-Air” star.

Ironically, and sadly, Jonathan Bennett turned in what was perhaps his best yet performance with a very strong jazz routine on Monday night. Unfortunately, it was too little, too late for thestar, who along with his professional partner Allison Holker said goodbye to the competition.

But before that, there were some standout performances from the usual suspects. Aside from Ribeiro, who stole the night with his partner Witney Carson on a very challenging and intricate salsa routine, it was a close battle between Bethany Mota, Sadie Robertson, Lea Thompson and Janel Parrish.

Following are my picks for the top five performances on the night, in countdown fashion (because everyone loves a good countdown … even if you already know who my #1 is):

Also read: ‘Dancing With the Stars’ Latin Night Teases Steamy Romance, Breaks Up With One Couple

5. Janel Parrish/Valentin Chmerkovskiy (Samba)
While this was technically very strong, the only reason I couldn’t rank the “Pretty Little Liars” star higher was because of over-acting and over-dancing. Sure, the dance is supposed to be sexy and alluring, but she looked more like she was in a nightclub trying to get a drunk guy to pay attention to her. There was a desperation and frantic element to her moves that was distracting. Sometimes less is more. (Judges’ score: 33)

4. Lea Thompson/Artem Chigvintsev (Salsa)
Other than one body slide that caused a minor hiccup, this was easily the most in-command and confident I’ve seen the “” actress. She was powerful and absolutely mesmerizing, going toe-to-toe with her professional partner though some incredibly challenging moves. (Judges’ score: 32)

3. Bethany Mota/Derek Hough (Tango)
While I was impressed with the intricate footwork, and Mota’s command of this difficult dance style, I felt at times that her carriage was almost a bit too severe, as if she were focusing too much on holding this stiff position, rather than sell the presentation and story of the moves. (Judges’ score: 36)

2. Sadie Robertson/Mark Ballas (Rumba)
While this one didn’t have some of the intricate moves of the other performances on the night, there was an elegant beauty to Ballas’ routine. Robertson looked like a 1940s movie star, gliding effortlessly across the stage. I would have liked to see more of a challenge, or some more involved lifts, but I cannot fault a single bit of what she poured onto the stage in performance. (Judges’ score: 35)

See video: ‘Dancing With the Stars’ Week 4: Alfonso Ribeiro Does ‘The Carlton,’ Someone Goes Home

1. Alfonso Ribeiro/Witney Carson (Salsa)
The most confident and enjoyable performance on the night, Ribeiro and Carson took “Booty” to a new level, proving that some songs are simply meant for dance. Who knew that the geeky kid from “Fresh Prince” had more moves than just “The Carlton” in him? After an uncharacteristic misfire last week, Ribeiro is back on top and making a strong statement to the ladies of the season. If they want the Mirrorball Trophy, this is the guy to beat. (Judges’ score: 39)