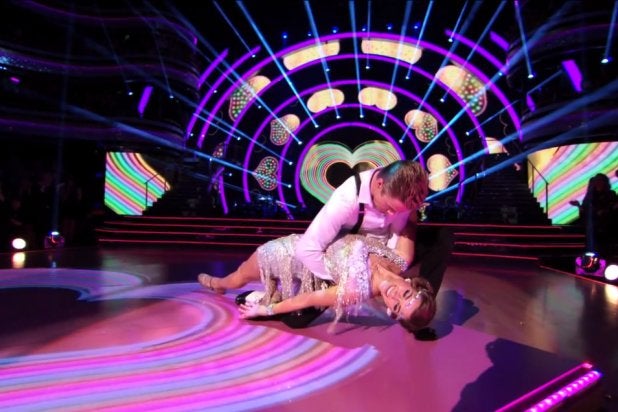 (Spoiler alert: Do not read on if you have not yet seen Week 5 of the competition on ABC’s “Dancing With the Stars.”)

It was guaranteed to be a surprise-filled night when America chose (via Twitter) who the celebrities would be paired with on ABC’s “Dancing With the Stars.” Fans took to the social media platform to take control of this one-night-only event, catapulting a new celebrity to the top of the leaderboard.

See video: ‘Dancing With the Stars’ Week 4: Alfonso Ribeiro Does ‘The Carlton,’ Someone Goes Home

Sadie Robertson found herself paired with Derek Hough for the week, who has been on top with his usual partner Bethany Mota. While Robertson and Hough did not match his previous perfect score with Mota, they did earn top marks on the night with 36 out of 40 points for their Charleston.

It was a partner swap, as fans paired Mota with Robertson’s usual partner, Mark Ballas, who scored a modest 32 points for their hop-hop routine. At the bottom, even with a new partner, remains Michael Watrip. The NASCAR driver took on disco with Witney Carson, and it wasn’t pretty, scoring only 20 points.

For Carson, this was quite a blow coming off of last week’s perfect score when she and her regular partner Alfonso Ribeiro brought back the famous “Carlton” dance from his days on “The Fresh Prince of Bel-Air.”

Also read: ‘Dancing With the Stars’ Karina Smirnoff Pouts Instead of Performs Because of Knee Injury

Waltrip’s usual partner in crime, Emma Slater, paired with Tommy Chong for a mambo, but she didn’t fare much better, earning 24 points for the second-lowest marks on the night.

Other mashups included Jonathan Bennett pairing with Peta Murgatroyd, with the new matchup doing nothing to raise his 24 from last week. His usual partner, Allison Holker, danced with Antonio Sabato Jr., who bid his partner Cheryl Burke farewell, as she paired with Ribeiro for the night. Both couples fared well, earning 28 and 34 points respectively.

The judges appeared harsher this week on the new pairings, or maybe it’s just further proof that chemistry and experience together make a huge difference in dance partnerships. There have been perfect scores handed out in the last two weeks, but there was not even a single 10 given out by any of the judges this time around, even with tough judge Len Goodman absent, replaced by Jessie J.

At least there was good news for all of the remaining dancers. The judges announced that there would be no eliminations this week.

All nine couples will return to compete as “Dancing With the Stars” continues every Monday at 8 p.m. ET on ABC.