Actor Colin Farrell disappeared into the role of The Penguin in the most recent reboot of the Batman character in Warner Bros.’ “The Batman,” and he’s gotten the seal of approval from an expert on the matter: former Penguin actor Danny DeVito.

DeVito played the iconic Batman villain in director Tim Burton’s 1992 film “Batman Returns,” and while speaking with TheWrap about his upcoming HBO movie “The Survivor,” we asked if he had a chance to catch Farrell’s take on the character in “The Batman” yet.

“Yes, I did. I thought Colin did a great job,” DeVito said. “Certainly a different milieu. I think it was a more edgy, serious, gangster-y Batman. Of course there’s three Italians who are bad guys in it, the Falcones (laughs). But I feel like in terms of the performances, I thought Colin – who is a good buddy of mine – I think he did a great job in that. You take your hat off to anybody who sits in the makeup chair that long. I did it with The Penguin and loved it.” 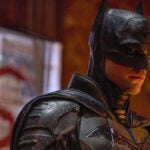 But DeVito also admitted that he’s still partial to Burton’s more Gothic take on the character versus the more realistic and grounded approach that director Matt Reeves took the story in “The Batman.”

“My feeling of comparing the two movies, I’m like a Tim Burton fan,” DeVito added. “I like the whimsical, the operatic, the disaffected Pee-wee Herman throws me off a bridge (laughs). That makes me smile. So it’s a different situation, but I did watch the movie.”

Indeed, Burton’s 1992 sequel opened with Pee-wee actor Paul Reubens throwing his deformed child off a bridge, kicking off the origin story for DeVito’s delightfully grotesque spin on the Penguin character.

And while DeVito approved of Farrell’s performance, he had some notes about his experience watching “The Batman” that he wanted to add.

“A couple of comments I could make about the exhibition of the movie,” DeVito began, before launching into a delightful rant about the amount of commercials and previews that played before the actual film. “I saw it in a movie theater, it was a big screen in California at a place on Sunset Boulevard somewhere. It was a weird thing because I went with my son and it was an 8:30 show. It was a place where you could get a beer, and I got popcorn and he got a beer and we went in, and then we watched a half hour of commercials. So we got there at 8:30 and the movie started like a little after 9. So there’s like a bunch of commercials for shoes and products and really craziness, and then there was like, I don’t know, 15 minutes of trailers. Now it’s like 9:00 and I sat through a three-hour movie. I sat there with the trailers and I had to run to the bathroom before I sat through the three-hour movie. I gotta remember next time! It says an 8:30 show, don’t go there until 9:00.”

The prolific actor, director and producer added with a laugh that someone should invent an app that tells you when the real movie starts. “This is a good app for somebody to put out. All the movies that are connected to an app and you say when is the real movie starting?” he said.

Look for our full interview with DeVito closer to the release of “The Survivor” on HBO on April 27.