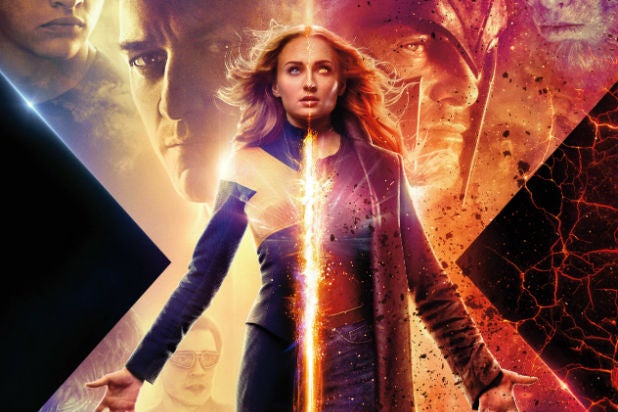 The most impressive thing about Simon Kinberg’s “Dark Phoenix,” the 12th movie in 20th Century Fox’s wildly inconsistent “X-Men” superhero franchise, is that it’s not the worst one. It’s rather embarrassingly scripted and acted out by a cast who, pretty much across the board, look like they’d rather be anywhere else, but at least it’s not quite as awful as “X-Men Apocalypse,” “X-Men Origins: Wolverine,” or “X-Men: The Last Stand.”

Of course, “Dark Phoenix” is practically a remake of “The Last Stand”: The timeline for these X-Men movies got reset in “Days of Future Past,” not that it made the continuity any clearer — 29-year-old Nicholas Hoult plays a character who should by now should be pushing 50, but nobody told the makeup department — and they’re officially back in familiar territory. And they’re making the same old mistakes.

Sophie Turner (“Game of Thrones”) returns as Jean Grey, a mutant with telepathic and telekinetic abilities who, during a daring rescue mission in outer space, absorbs an enormous amount of cosmic energy, amplifying her powers and making her mentally unstable. Or rather, they reveal to her why she’s been mentally unstable all along: Professor X (James McAvoy) constructed psychic walls within her mind to protect her from childhood trauma, and now it’s all flooding out at once, in a wave of violent superhuman outbursts.

While the X-Men try to find Jean and save her from herself (and to save everyone else from her, for that matter), a shapeshifting alien species lands on Earth and assumes human form. Led by Vuk, played by Jessica Chastain with all the energy of someone blackmailed into starring in a movie, they want Jean’s “Phoenix Force” for themselves, and they’re willing to kill to get it.

Since they’re based on the same comic book storyline, “Dark Phoenix” will give anyone who sat through “The Last Stand” a serious case of déjà vu. But it also (and probably more coincidentally) has distracting similarities to the recent superhero blockbuster “Captain Marvel,” from the hero who absorbs limitless cosmic energy and gets tracked down by shapeshifting aliens, to the disturbing subplot about women getting psychologically manipulated into suppressing their emotions in order to neutralize their agency and/or power.

But whereas “Captain Marvel” led to the clear conclusion that these mental blocks were reprehensible, “Dark Phoenix” seems unwilling to pass judgment on Professor X for wronging Jean Grey. He broke her, but now only he can save her, and the solution to her problems can only come from putting all her trust in the man who manipulated her through her whole life. It’s a film about redeeming him for hurting a woman, not so much a film about the woman he wronged. And since the film’s antagonists are both powerful women, one overcome with dangerous emotions and one dangerously devoid of them, and since the film’s a body count that skews heavily towards one gender, it’s hard not to interpret “Dark Phoenix” as one-sided, paranoid, and sexist.

And even if you put all that aside, the story still doesn’t make any sense. Again, like “The Last Stand” before it, “Dark Phoenix” doubles down on the idea that Professor X manipulated Jean Grey’s mind, suppressed her abilities and her emotions and her memories, allegedly for “her own good.” Which is another way of saying that the whole story revolves around Professor X — a telepath who’s been reading other people’s thoughts for decades — having absolutely no idea how psychology works. Because surely repressing her traumatic memories won’t come back to bite Jean Grey in the future. What could possibly go wrong?

It’s a premise built on a foundation of sand, and “Dark Phoenix” also looks frustratingly cheap. After an impressively heroic opening sequence in outer space, Kinberg’s film settles into ho-hum surroundings like schools, suburban homes, hotels and trains. The one time the movie goes someplace completely new — a place X-Men fans have probably wanted to see onscreen for 19 years — it looks like a community garden made out of leftover sets from “The Darkest Minds.” Get ready to thrill to the scene where the X-Men have to cross a street, and to the scene where they load half a dozen people onto the biggest train in history just because they gotta set the finale somewhere.

Yet all is not lost in “Dark Phoenix.” Some attention gets paid to the history of the characters, with Storm (Alexandra Shipp, “Love, Simon”) relating her trust of Apocalypse to the X-Men’s unwavering, and possibly ill-advised trust in Jean. It’s a real treat to see the X-Men acting like superheroes, embraced by the masses as part of a well-orchestrated publicity scheme. The action sequences are clearer and more inventive than usual, and the cinematography by Mauro Fiore (“The Magnificent Seven”) is bright and colorful. The film looks like a freshly printed comic book, and at its best it feels like one. You could absorb it with the sound off and have a perfectly adequate time.

Turn the sound on, and you’ll be stuck with a derivative story that eschews all the daring qualities of the original Marvel Comics “Dark Phoenix Saga” and drains them of their purpose. The comics version was about what happens when somebody you love does something terrible, even unforgivable. The movie tries to be about that same topic, but the franchise has already covered the material. Magneto (Michael Fassbender) committed mass murder, and he gets a free pass. Every. Single. Time. But for some reason, as soon as Jean Grey has a body count of one — by accident no less — everyone’s ready to execute her on sight.

For a story as big as the one “Dark Phoenix” wants to tell, it’s a very tiny motion picture, full of events that could have transpired (and many of them did) in just about any other X-Men movie. Turner makes the most of her increased screen time, trying with some success to infuse the simplistic and irrational storyline with some humanity, but everyone else looks like they’re more interested in what craft service made for lunch that day. It’s a whole lot of nothing, made from the scraps of something great, assembled with Scotch tape, and ready to fall over.

It would be wonderful to report that “Dark Phoenix” was an impressive send-off to this long-running franchise (especially since the next film, “New Mutants,” isn’t coming out anytime soon). In a strange way, it might have been preferable if this was the most embarrassing film in the series, since at least then there’d be a reason to remember it. Instead it’s just a disappointingly average superhero flick, with a familiar story, disinterested actors, some cool action sequences, and a whole lot of missed opportunities.