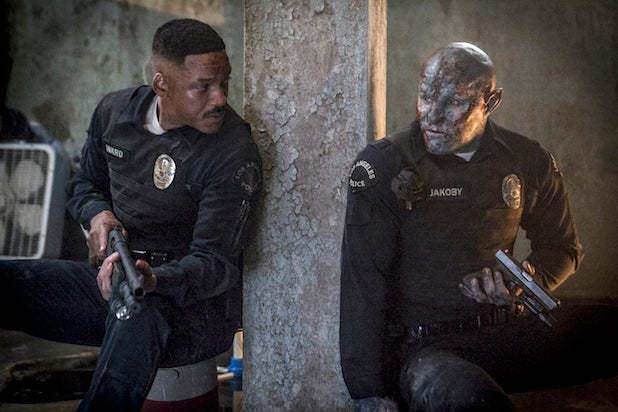 Yikes — looks like David Ayer’s “Bright” should’ve been left in the dark.

The reviews are in for the Netflix film, and critics have given the film starring Will Smith and Joel Edgerton a collective 32 percent on Rotten Tomatoes.

“To prepare for writing ‘Bright,’ it seems Max Landis decided to throw every cop film cliche into a Cuisinart, put it on the high setting and leave the top off,” wrote The Associated Press’ Mark Kennedy. “This film is what happens when Harry Potter throws up on ‘Training Day,’ ’16 Blocks,’ ”The Wire,’ ’48 Hours’ and ‘Police Academy.'”

TheWrap’s film critic Todd Gilchrist wrote in his review, “astoundingly bad in virtually every way, ‘Bright’ shares in common several of the shortcomings of Ayer’s previous film, including conspicuous evidence of desperate efforts to cobble its under-explained and yet somehow overcomplicated mythology into something coherent.”

When IndieWire’s David Ehrlich wrote, “there’s boring, there’s bad, and then there’s ‘Bright,’ a movie so profoundly awful that Republicans will probably try to pass it into law over Christmas break,” Ayer himself took to Twitter to write, “This is going on my fridge.”

I really appreciate that. Every movie is a labor of love for me. I’ve never chased the audience, and I know my work can be polarizing. I’ve lived a crazy love and I guess my movies reflect that. https://t.co/YZBp2DwKlO

However, not all the reviews are bad — some called it an “astonishingly well-executed” movie, while others called the film “fun” and “high-concept.”

Also Read: Will Smith Compares Rise of Trump-Era GOP to 'The Purge': 'Darkness Before the Dawn'

See nine of the worst reviews below.

“There’s boring, there’s bad, and then there’s ‘Bright,’ a movie so profoundly awful that Republicans will probably try to pass it into law over Christmas break. From the director of ‘Suicide Squad’ and the writer of ‘Victor Frankenstein’ comes a fresh slice of hell that somehow represents new lows for them both — a dull and painfully derivative ordeal that often feels like it was made just to put those earlier misfires into perspective. The only thing more predictable than this high-concept police story is the idea that a year as punishing as 2017 would save the worst for last. At least ‘The Emoji Movie’ owned up to the fact that it was just putting shit on screen; at least ‘The Emoji Movie’ had the courtesy to dress it up in a bowtie.”

“Frankly it’s hard to imagine ‘Bright’ inspiring anyone to want to see or make a full-blown series of films. Aside from a few nifty ideas and the occasional amusing or exciting scene, this film is a chore… As for Ayer’s direction, ‘Bright’ has a lot more in common with his thudding, at-times-incomprehensible ‘Suicide Squad’ than his respectably lean tough-guy movies ‘Fury’ and ‘End of Watch.’ The film’s look and tone is so aggressively grim that the title almost seems like a joke.”

“To prepare for writing ‘Bright,’ it seems Max Landis decided to throw every cop film cliche into a Cuisinart, put it on the high setting and leave the top off. This film is what happens when Harry Potter throws up on ‘Training Day,’ ’16 Blocks,’ ”The Wire,’ ’48 Hours’ and ‘Police Academy.'”

“‘Bright’ is a Christmas gift to the major studios, with their attempt to mimic would-be Hollywood biggie failing as badly despite (or perhaps because) of relative creative freedom. It makes the prototypical Hollywood genre film look that much better, and it again shows that Netflix is (thus far) at its best when it’s giving us what Hollywood won’t (‘First They Killed My Father,’ ‘Mudbound,’ ‘Okja’) as opposed to trying to mimic a would-be tentpole (‘Death Note,’ ‘Bright,’ ‘War Machine’). ‘Bright’ is such a would-be mockbuster that it almost acts as an act of subversive sabotage for the major theater chains. Better luck next time.”

“‘Bright’ is clearly intended to set up a sprawling, alternative world that could be revisited in sequel after sequel, but that world’s mythology is downright confusing. The title describes people who can wield magic wands, but the hows and whys of that are never clearly explained. There’s talk of a shadowy, big bad figure on the horizon, though he’s clearly just being set up for an appearance in some hoped-for sequel. Rapace’s Leilah is an incredible fighter, and excels at strutting around like someone who’s watched the ‘Underworld’ films one too many times, but there’s little sense of emotional connection. ‘Bright’ is a series of disconnected action vignettes that work as standalone sequences, but don’t hang together in any kind of meaningful way. It’s impossible to not think of ‘Suicide Squad’s’ similar failings as ‘Bright’ barrels from one dark, noisy scene to the next.”

“‘Bright’ is a movie that spends far too much time explaining itself–and, often, re-explaining itself–that the actual story, when we finally get to it, is not much more than empty gunshots and blood splatter with a faerie tale twist… In the end, it’s probably a blessing for ‘Bright’ that it ended up on Netflix, where it can sit in a queue for as long as the audience wants. It’s the opposite of must-see. It’s a collection of admittedly impressive action sequences (like, $90 million impressive) trying to be so much more. Barring a certain Centaur Cop spin-off, ‘Bright’ mostly deserves to be dimmed.”

“While we should all know better than to expect much from director David Ayer (‘Suicide Squad’), he, usually, at least gets the action right. In ‘Bright,’ it’s boring and repetitive — some stabby, stabby over here, some bang, bang over there. Oops, you’re dead.”

“There is a whiff of an interesting idea in there, but it is buried in tedious scenes lacking clear direction, endless generic (and poorly lit) shoot-outs, and cringeworthy sequences of allegedly witty banter. This movie is an absolute wreck–which is unfortunate, as it is also something of a big debut for Netflix’s original-films shingle.”

“‘Bright’ is surely, on paper, a distinctive fusion of genres. However, if an alternate present-day reality where ordinary humans, sub-level orcs, affluent elves and fairies have been coexisting since the beginning of time sound like a dreadful, misguided, ridiculous idea, that’s because it most certainly is. At least in this form and execution. A mythic, fairytale mess — that kind that makes no f—ing sense — it should come with a glossary of terms or a graphic novel to unmuddle itself, but certainly doesn’t.”