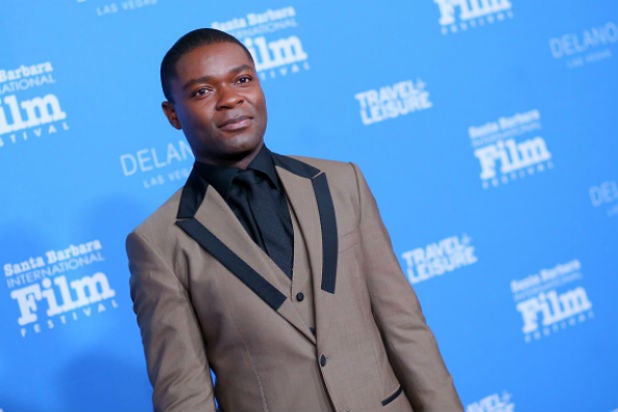 Those who are still stung by the lack of Oscar love for “Selma” may have found a little validation Thursday morning.

David Oyelowo, who was critically acclaimed for his portrayal of Martin Luther King Jr. in the film, was nominated for an Emmy for Best Actor in a Limited Series or Movie for his work in “Nightingale,” and the film itself was honored for Best Television Movie.

To hear the actor tell it, the two events are inextricably linked.

“When the Academy Awards nominations were announced and ‘Selma’ didn’t get as much as love as we would like or [producer] Brad [Pitt] would like, that was the moment he felt, ‘Today’s a good day for me to watch that film of David’s that’s in my inbox,'” Oyelowo told TheWrap. “He did watch it and that’s how it found its way to HBO, and here we are.”

Below, Oyelowo also talks about what it’s like to be nominated in the same category as some of his acting heroes, the high amount of diversity represented in this year’s nominees and how he’s going to celebrate his nomination.

So I guess the method acting is really working out, huh?
Yeah, I guess it is! [laughs] I hope I don’t have to go through as painful of an experience each time to get this sort of recognition, but I guess you get out what you put in.

What was your immediate reaction when you found out you had been nominated?
My immediate reaction is that I’m flabbergasted, really, at how far this film has come, considering we made it very much not with anything like HBO in mind and the kind of audience it could reach, let alone the awards stuff. So I’m kind of floored by that. But I’m just elated that not only myself was nominated, but the film as well. Everybody involved really took a risk in making such an unusual film, so to have that rewarded is very gratifying.

How are you going to celebrate?
To be perfectly honest, I think nominations and all that are fantastic, but for me it’s all about the work. I’m literally in the car right now headed to a meeting, already planning for the next one. I’m celebrating by keeping it moving.

Who do you see as your stiffest competition in your category?
The word you just used there is why the whole awards thing itself is so bizarre. The idea of an art form being reduced to a competition is so bizarre to me, so I can’t speak to the competition of it all, but I can definitely tell you that for me, to be nominated alongside Mark Rylance, who I remember seeing play Hamlet at the Globe Theater in London when I was a drama school student, and he absolutely blew my head off with his performance. To be anywhere near him is extraordinary for me. Richard Jenkins, who I’ve worked with on “Jack Reacher,” who I truly believe is one of the best actors working today. Again, to be alongside him is stupendous, really. I just feel very blessed to be in their company.

Is there anyone who’s maybe been a naysayer in the past who you would like to rub this in the face of?
Put it this way: Why you and I are talking today is that when I was doing the film “Selma” — we had already shot “Nightingale” — and the producers on that film, I showed them “Nightingale” and they sent it to their boss, Brad Pitt. Brad is a pretty busy guy, so it sat in his inbox for a while. But when the Academy Awards nominations were announced, and “Selma” didn’t get as much as love as we would like or Brad would like, that was the moment he felt, ‘Today’s a good day for me to watch that film of David’s that’s in my inbox.’ He did watch it and that’s how it found its way to HBO, and here we are. So I guess something very good came out of that morning of the Oscar nominations.

Were there any snubs that upset you this year? Who really deserved to be nominated but wasn’t?
I don’t really know, to be completely honest with you. I haven’t looked at the whole list of who got nominated and who didn’t. But I’m very happy to see a nice smattering of color in there. I’m loving seeing Viola Davis in there, Queen Latifah and Don Cheadle and Anthony Anderson, so that’s a good thing. I’m loving seeing nominees who are reflective of the America we live in.

How are you going to wow voters now? Do you have a secret weapon?
I would like to think the film is enough. It’s wonderful to be nominated, I think it’s a little bit odd to have to be like a politician, have to go out there and corral votes and things like that. The great thing about being on HBO is that the work is there and hopefully people see it and if people like it enough, they know how to vote for me.

“We took a long shot, and we scored!!!” – David Oyelowo. Congrats to the #Nightingale team on today’s #Emmys noms. https://t.co/CA2XlLY6jg