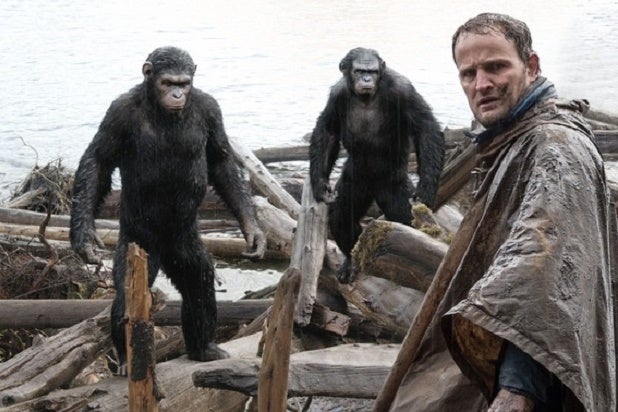 “Dawn of the Planet of the Apes” will make like King Kong at the box office this weekend, and should knock “Transformers: Age of Extinction” out of the top spot that it’s held for two weeks.

The $170 million 3D sci-fi epic from Fox and Chernin Entertainment is heading for a $60 million opening weekend, say analysts. The studio is a little more conservative, but there’s no lack of confidence — it has already commissioned another “Planet of the Apes” film for 2016.

“Dawn of the Planet of the Apes” is the eighth film in the series that dates back to 1968 and will push the franchise over the $1 billion mark at the worldwide box office. It will open at 10 p.m. Thursday and by Friday be in 3,966 theaters (3,130 3D) in the U.S. and Canada. It won’t be in IMAX theaters, which will stick with “Transformers,” but it will be in roughly 350 Premium Large Format locations.

It will also roll out in 28 foreign markets this weekend, including Australia, South Korea and most of Southeast Asia. The rest of the world will come after the World Cup.

Also read: How ‘Planet of the Apes’ Took Monkey Business to a New Level

The only dark cloud would seem to the the lackluster overall summer box office, which is running nearly 20 percent behind last year’s record-breaker.

Matt Reeves (“Cloverfield”) directs “Dawn of the Planet of the Apes,” which stars Jason Clarke, Gary Oldman, Keri Russell and Andy Serkis as the apes’ leader Caesar. Reeves has also signed on to direct the next “Apes” movie, and will reteam with Mark Bomback on the script. The “Dawn” plot has the apes and humans squaring off for control of the planet after a global pandemic. It’s one of the best-reviewed movies of the year at 97 percent positive on Rotten Tomatoes.

If audiences agree, word of mouth could drive a nice run over the next few weeks. There isn’t another big-budget tentpole movie opening until Disney and Marvel’s “Guardians of the Galaxy” on Aug. 1.

Given the expansion of the foreign market and the addition of 3D, “Dawn of the Planet of the Apes” is a good bet to exceed the $305 million that the last film took in overseas.

Also read: ‘Dawn of the Planet of the Apes’ Reviews: Does This Sequel ‘Rise’ Above Its Predecessor?

“Transformers: Age of Extinction” just crossed $600 million globally and is the only movie to repeat as No. 1 in the U.S. this summer. It’s losing steam domestically but should still wind up at around $25 million in its third weekend.

Michael Bay‘s morphing toy-bot epic dropped 63 percent from its opening weekend while topping a July 4 holiday that was the weakest in 15 years. It’s still going great guns overseas though, where it has taken in more than $421 million. That’s more than double its $185 million domestic total, and puts it on pace to become the year’s first billion-dollar blockbuster. “Age of Extinction” has taken in more than $225 million in China and passed “Avatar” as the all-time highest-grossing film there.