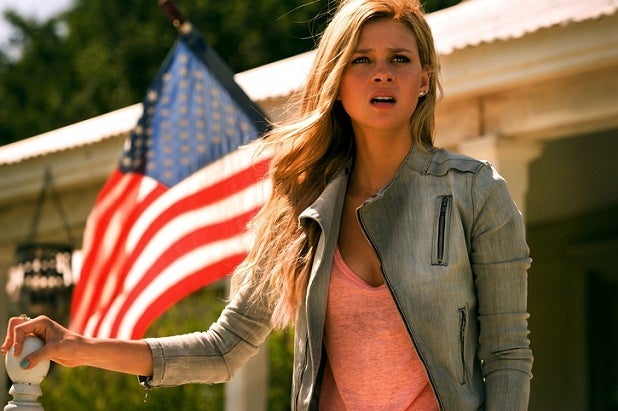 The holiday is running nearly 40 percent behind last year, when “Despicable Me 2,” “The Long Ranger” and “The Heat” drove a $223 million weekend. The primary culprit was the calendar. Fridays are typically strong nights, but with the nation celebrating Independence Day this was a dud — and the three movies opening wide didn’t set off much excitement, either.

Michael Bay‘s giant toy-bot epic brought in an estimated $10.6 million Friday. That means it will finish with around $40 million for Friday-Sunday and likely around $55 million for the five days. If that three-day total holds, “Age of Extinction” will have the lowest haul for an Independence Day weekend winner since Bay’s “Armageddon” was tops with $36 million in 1998.

No one at Paramount is crying. Hugely popular overseas and especially in China, the fourth “Transformers” is up to more than $430 million in worldwide grosses less than a week after it became summer’s first $100 million opener in the U.S. Starring Mark Wahlberg, it’s still on a saturation-level 4,233 theaters in North America, and its domestic haul will approach $180 million by Sunday.

Melissa McCarthy’s R-rated comedy “Tammy” was second and took in $6.3 million Friday. It’s on course for a $33 million five-day total, well over its $20 million budget for Warner Bros. But the three-day haul for the road trip tale directed by Ben Falcone and co-starring Susan Sarandon will be around $22 million, way under that of “The Heat” ($39 million) and “Identity Thief” ($34 million).

Relativity’s low-budget family film “Earth to Echo” and the Sony Screen Gems horror film “Deliver Us From Evil” were battling holdovers “How to Train Your Dragon 2” and “22 Jump Street” for third. They’re all looking at between $8 million and $10 million for the three days.

Also read: ‘Tammy’ Reviews: Melissa McCarthy Swings for Another Hilarious Comedy – But Does She Miss?

“Earth to Echo,” a $13 million acquisition from Disney, brought in $2.6 million Friday and is looking at a five-day total in the $15 million range. The Jerry Bruckheimer-produced “Deliver Us From Evil” will do about the same $15 million over the five days, soft given that it’s the summer’s first wide-release horror film. The audience was split almost evenly between men and women, and 51 percent was over the age of 25.

Disney’s “Maleficent” and Warner Bros.’ “Jersey Boys” were next Friday. They took in just under $2 million and should finish between $6 million and $7 million for the three days. The Angelina Jolie fantasy tale has made more than $600 million worldwide, and this weekend is poised to end the four-month reign of “Frozen” atop the box office in Japan. Clint Eastwood‘s musical should be near $40 million after three weeks by Sunday.

The Dinesh d’Souza documentary “America,” his followup to the 2012 breakout hit “2016: Obama’s America,” was running just out of the top ten, behind “Think Like a Man Too” and “Edge of Tomorrow.” It expanded from three to 1,105 theaters and brought in a little over $1 million Friday, putting in on course for a $3.6 million three-day total.

The romantic comedy “Begin Again” grossed $425,000 after expanding from five to 175 theaters for the Weinstein Company. The comedy starring Keira Knightley, Mark Rufalo and Adam Levine should finish with around $1.5 million for the three days.