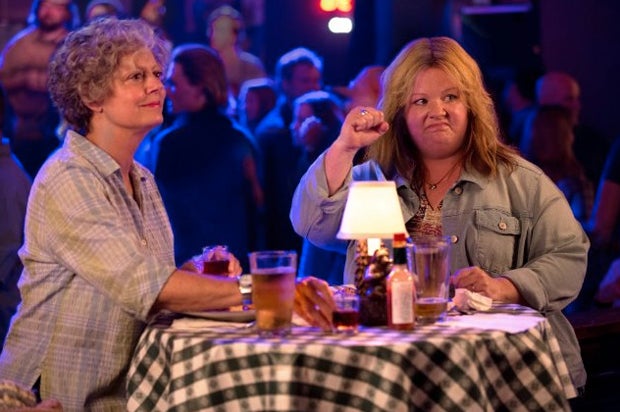 Melissa McCarthy is back on the big screen to play another obnoxiously hilarious heroine in “Tammy,” but there seems to be one big problem: It’s not that funny.

Though it’s projected to gross about $40 million at the box office this weekend, critics have hammered Warner Bros.’ R-rated release, which has garnered a 17 percent approval rating on Rotten Tomatoes, with 57 out of 69 critics declaring it to be “rotten.”

The premise of the movie starring McCarthy as the eponymous, down-on-her-luck fast food worker and Susan Sarandon as her grandmother is simple. After getting fired from her job and catching her husband in bed with a neighbor, Tammy embarks on a road trip to Niagra Falls with her gram to clear her head. Or something.

TheWrap‘s Alonso Duralde could never quite figure out what that something was, nor could he find the humor in the journey that doesn’t seem to have much at stake.

“One of the questions that comes up a lot in Screenwriting 101 classes is, ‘What does the protagonist want?’ It’s a question that co-writers Melissa McCarthy and Ben Falcone might have considered in “Tammy,” since it’s never really clear who the title character (played by McCarthy) even is, much less what her drives (and eventual goals) might be,” Duralde wrote in his review. “I certainly wanted to like Tammy, and ‘Tammy,’ since I’ve been a fan of McCarthy … But she and her husband Falcone (who also directed) have created a character comedy that’s missing both comedy and character.”

Vulture critic David Edelstein felt the entire movie was “off,” but hesitated to call it bad. But he made it clear it wasn’t good, either.

“The setup is promising, but the casting is … what’s that word again? Off. McCarthy is 43, Janney 52, and Sarandon 66 going on 40. Seriously, Sarandon is more gorgeous than she has been in any film since Bull Durham, a quarter-century ago,” Edelstein wrote. ” I admire McCarthy for casting her and for wanting to play someone real. As she proved in ‘Bridesmaids’ and ‘The Heat,’ she can sling an insult as deftly as anyone in movies. But she’s not much of an actress — not yet.”

Washington Post critic Ann Hornaday was also not satisfied with the casting — and very few other aspects of the movie.

“If Sarandon thought ‘Tammy’ might be a clever send-up of her role in the era-defining ‘Thelma & Louise,’ she was sorely mistaken: She flounders and flails as she tries to find a movie to share with McCarthy, who does nothing smart or subversive with her character other than make her progressively more shallow and mean-spirited,” Hornaday wrote. “‘Tammy’ is a bummer, not least because McCarthy’s fans know she’s better than this.”

Detroit News critic Tom Long described “Tammy” as “a road trip movie that veers all over the place,” with very few of the stops being enjoyable.

“Sometimes it’s funny, sometimes not so much. It makes sharp turns toward weepiness, flaunts ridiculous situations and unlikely relationships and depends almost completely on the loveability of its title character,” Long wrote. “Which is a problem in that Tammy, played by Melissa McCarthy, is, at best, an oblivious, yet overconfident, deluded twit who nevertheless feels both entitled and downtrodden. It’s hard to pinpoint anything redeeming about her character; you only feel sympathy for her because the movie implies you should. Sorry, movie, it doesn’t work that way.”

San Jose Mercury News critic Randy Myers also noticed “Tammy” racing all over the map. As one of the few critics who is recommending the comedy to moviegoers this holiday weekend, however, he thought it was “mostly in a good way.”

“While it runs afoul of some potholes, it never goes completely off the road and eventually rights itself, thanks to one rowdy cast of actors and characters riding shotgun,” Myers wrote. “It also has two aces up its sleeve — Susan Sarandon and Kathy Bates, veteran actresses who play their offbeat, colorful characters to the hilt. In tone and style, “Tammy” reminded me of Steve Martin‘s hilariously rude 1979 comedy ‘The Jerk.’ ‘Tammy’s’ not as good, but it’s good enough.”