It’s round 2 between Warner Bros./New Line’s “Mortal Kombat” and Funimation’s “Demon Slayer,” and this time, “Demon Slayer” may actually come out as the victor.

After an opening weekend where the anime film came surprisingly close to topping “Mortal Kombat” for the No. 1 spot, industry estimates have “Demon Slayer” just edging out the video game adaptation with $6.4 million from 1,915 theaters in its second weekend compared to $6.2 million from 3,113 theaters for “Kombat.” With such close margins, it will come down to final totals on Monday to determine who ends up on top on the charts.

Regardless, both films are showing the kind of frontloaded box office performance analysts were expecting with drop-offs of over 70% from their opening weekends. With R ratings and very specific lore that can shut out most casual audiences, both “Kombat” and “Slayer” were expected to have minimal legs with 10-day totals of around $34 million. 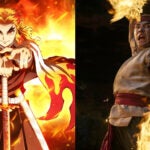 That mark puts “Demon Slayer” as the third highest-grossing anime film in U.S. history behind only “Pokemon: The First Movie” and “Pokemon: The Movie 2000,” the latter of which has $43.8 million and could be passed by “Demon Slayer” depending on whether fans are interested in showing up for repeat viewings in the next couple of weeks.

Warner Bros./Legendary’s “Godzilla vs. Kong” is getting closer and closer to becoming the first film since the pandemic to gross $100 million in the U.S., adding $2.7 million in its fifth weekend to take the No. 3 spot and bringing its domestic total to $90 million. If it hits that milestone, Warner Bros.’ decision to push back the release of “Mortal Kombat” by a week may have been the difference, as it allowed “Kong” to enjoy another weekend without competition from a fellow studio release that wasn’t expected to have as much wide appeal.

In fourth is the sole new entry in the top 5, the Open Road horror film “Separation,” which grossed an estimated $1.7 million from its opening at 1,751 locations. The film was panned by critics and audiences with an 11% critics score on Rotten Tomatoes from 19 reviews and a 35% audience score.

In a narrow race for the last spot in the top 5 are Disney’s “Raya and the Last Dragon” and Universal’s “Nobody,” each with “Raya” just barely edging out with $1.33 million compared to $1.26 million for “Nobody.” The Bob Odenkirk action film has a total of $23.3 million after six weekends while “Raya” has a total of $41.4 million after nine weekends.

On the indie side is Vertical Entertainment’s drama “Four Good Days,” which stars Mila Kunis as a recovering addict living with her mother, played by Glenn Close. Opening in 298 theaters this weekend, the film grossed $303,000 this weekend for a per theater average of $1,017. Reviews were mixed with a 53% score on Rotten Tomatoes.