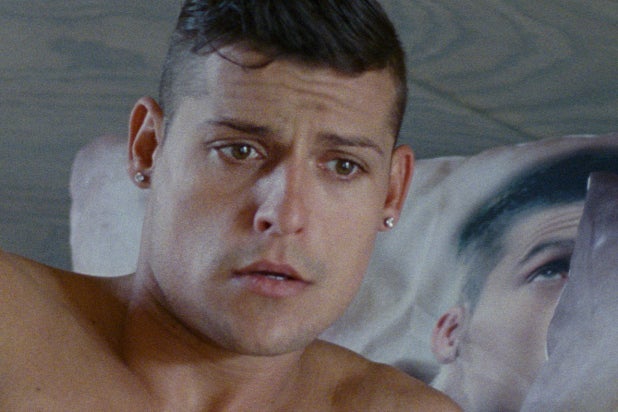 Points for originality should go to “Diamantino,” an amusing but scattershot comedy that revolves around a world-famous Portuguese soccer star patterned in part on Cristiano Ronaldo. Co-directed and written by Gabriel Abrantes and Daniel Schmidt, this is a film that takes a lot of chances with its tone as it moves from farcical moments to scenes with earnest political messages.

Diamantino (Carloto Cotta) is a national idol on the soccer field, and whenever he scores a goal he sees enormous fluffy puppies surrounding him. This imagery of the giant puppies is funny because they’re so obviously meant to be small and harmless pets, and here they’re seen stomping around like dinosaurs. (Part of what makes this work is Irma Lucia’s lo-fi effects, which would probably not be as funny if they were slicker and more professional.) These giant fluffy puppies are an apt symbol of Diamantino himself, a sports God who is so absurdly innocent that he can be used by anyone around him for either good or bad purposes.

Diamantino is inspired by his kindly father and beset by a pair of ever-angry twin sisters, Sonia (Anabela Moreira) and Natasha (Margarida Moreira), who constantly berate him as soft and unmanly. One day while they idle on their yacht, Diamantino sees a boat filled with refugees, and when he makes eye contact with a woman who has lost her child at sea, the imagery goes into slow motion as she screams at him silently.

Cut deeply by this encounter with the refugee woman, Diamantino is so upset that he loses the World Cup game he is playing soon afterward; the giant fluffy puppies that usually accompany his victories disappear. He breaks down and cries on the field, and fans soon flood the internet with memes of Diamantino as a crybaby. His father dies, and the wicked sisters make a deal with the Portuguese government to clone him.

At the same time, Lucia (Maria Leite) and Aisha (Cleo Tavares), a pair of female lovers from the Portuguese secret service, are monitoring Diamantino to catch him in a money-laundering scheme started by his sisters. When Diamantino tells a talk-show host that he wants to adopt a refugee, Aisha poses as a refugee in order to get inside Diamantino’s estate; if this sounds like too much plot for one movie to handle, that’s because it is, particularly when Abrantes and Schmidt start to pile on issue after issue and to show how Diamantino is used as a right-wing pawn to get Portugal to leave the European Union.

This is a movie that is at its best when it’s at its silliest, and Cotta gets a lot of laughs with “just how dumb is he?” jokes where he makes his face as blank as it can possibly be. Diamantino is a narcissist who has images of himself all over his house: On his bed, there are two pillowcases facing each other with his image in profile on them, so that it looks like they’re about to kiss each other. “Make a deep face, like a fish,” he tells Aisha before posing for a pouty selfie.

When Diamantino is sent to get cloned, we learn that he has never had sex: “Must be cool, but seems difficult!” he says. Aisha keeps laughing at him, and she probably laughs at him too much in the mid-section of the movie, as if the filmmakers are worried that we need some extra prodding to find him funny. The switches in tone really start to slip towards the end; we are meant to laugh at the wicked sisters but then also to take them somewhat seriously as a threat.

Diamantino begins to grow breasts after his clone treatment, and this seems to be what finally makes Aisha fall in love with him. “Diamantino” takes place in a world where traditional masculinity is either absent or off-stage, and the filmmakers never resolve what they are trying to say about gender and innocence and good and evil, but all this can be forgiven once Cotta walks among his giant fluffy puppies again. This picture feels fated to be remembered as the “giant fluffy puppy soccer movie,” and both the giant fluffy puppies and Cotta provide enough laughs to make it worthwhile.