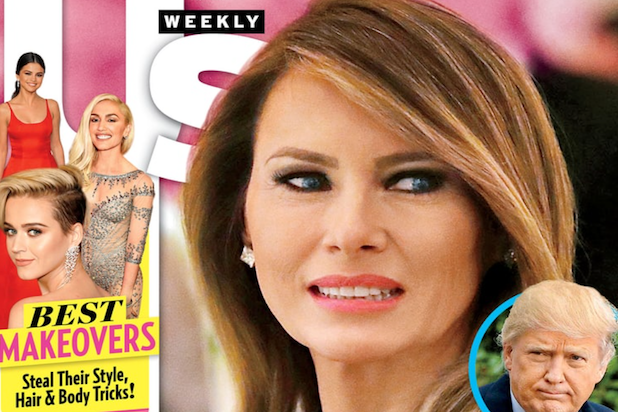 Did laid-off Us Weekly staffers go down fighting the magazine’s new Trump-friendly owner?

You might draw that conclusion from its latest cover story, which landed the day before mass layoffs at the celebrity magazine. While many journalists say they don’t care what public figures do in their bedrooms, Us Weekly purported to push open Donald and Melania Trump’s bedroom door — or bedroom doors, if Us is to be believed.

“Donald Trump and First Lady Melania Keep Separate Bedrooms: ‘They Never Spend the Night Together,'”  blares the cover story of the latest issue, which appeared online Wednesday. No reporter took credit for the piece, which carries the byline, “Us Weekly Staff.”

Also Read: Us Weekly Lays Off 40 Staffers, Including Editor-in-Chief, On Heels of Sale to AMI

You could read it as mere tabloid gossip — or as a last-gasp provocation. On Thursday, Us Weekly reportedly laid off 40 employees, including editor-in-chief Michael Steele. The layoffs come after American Media, Inc., owner of the Trump-friendly National Enquirer, agreed to purchase the magazine from Wenner Media.

AMI and Us Weekly did not immediately respond to TheWrap’s separate requests for comment.

But staffers who think they have a chance to save their jobs probably wouldn’t risk offending their new, conservative boss with a story so hostile to the Trumps.

The story claims that Melania Trump “refuses to share a bed with Donald even on the rare occasions when they sleep in the same city,” and they “never spend the night together.” It cites a separate source who claims they “do sleep in the same room but keep separate beds.”

AMI CEO and Chairman David J. Pecker, a friend of Trump, is taking over Us Weekly from Jann Wenner — a liberal journalist who scored a White House interview with President Obama for Rolling Stone the day after Trump’s surprise win.

The Enquirer has run a flood of pro-Trump stories, including one that wrongly proclaimed he has released his tax returns. Last year, the Wall Street Journal reported that the Enquirer even quashed a story about  Trump having an affair with a Playboy model.

It’s probably safe to say Us Weeky’s Trump coverage will get a lot friendlier after this week’s issue. How could it not?