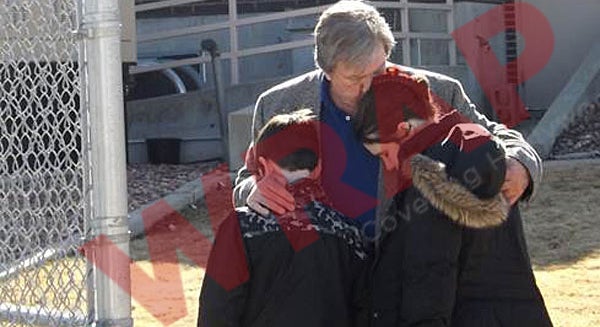 TheWrap has obtained an exclusive photo of “Die Hard” director John McTiernan saying goodbye at the prison gate to his two children, Jack, aged 10 and Truman, 12.

McTiernan surrendered to federal authorities in Yankton, South Dakota on Wednesday to serve a 12-month sentence for perjury and lying to the FBI as part of the Anthony Pellicano Hollywood wiretapping scandal.

He is serving his sentence at a minimum security prison. McTiernan has recently lived on a ranch in Wyoming with his wife and two children.

In an exclusive interview with TheWrap, Gail McTiernan claims that her husband, who was convicted of making false statements to an FBI agent, did not know to whom he was speaking when he initially talked on the phone to federal agents.

She said an agent did not properly identify himself to McTiernan.

"This can’t be happening in this country," Gail McTiernan said. "You have to know who you are talking to before you are branded a felon."

McTiernan has not spoken to the media, and his wife said that may have been a mistake. "I think John would have been perhaps better served had he talked to the media earlier," she said.