An explosion of digital distribution means that it’s a beautiful time to be an independent filmmaker, filmmakers such as Barbara Kopple (“This Is Everything: Gigi Gorgeous”) and writer-director Marti Noxon (“To the Bone”) said Monday at TheWrap’s Sundance Industry Panel.

Producers and executives revealed that the rise of digital alternatives to theatrical release combined with crowdfunding and social media channels has given storytellers options to push content in broad or very narrow fields.

But as Noxon noted, it’s even more important for creators to refine their material before taking advantage of new distribution and funding opportunities: “Just because you can make a movie doesn’t mean you should.”

Tim Shey, head of scripted for YouTube Originals — which hosted “How to Make Your Indie Rise in the Age of Digital” at its space on Park City’s Main Street — pointed to the January release of “Lazer Team,” a space adventure cast with YouTube stars. The film made a stunning $1.5 million in theaters, while also streaming on YouTube.

“They made $2 million from 10,000 fans with an IndieGoGo campaign. That’s not a lot of people,” Shey told moderator Sharon Waxman, CEO of TheWrap. “It’s fascinating you can get that kind of money. And then made $1.5 million in box office over two weekends.”

Any indie distributor would be lucky to have the same return, noted Rhodes Entertainment president and founder Matt Rhodes.

The festival is haven for artistry and grittier storytelling, but the panel chat drifted to the rise of social media influence, crowdfunding and cutting out the middle man.

Not only did YouTube distribute “Lazer Team” on its own subscriber network, Red, the filmmakers landed theatrical distribution through the crowdsourced company Tugg — in which productions recruit ticket holders for individual screenings across the country and keep 5 percent of the sales. 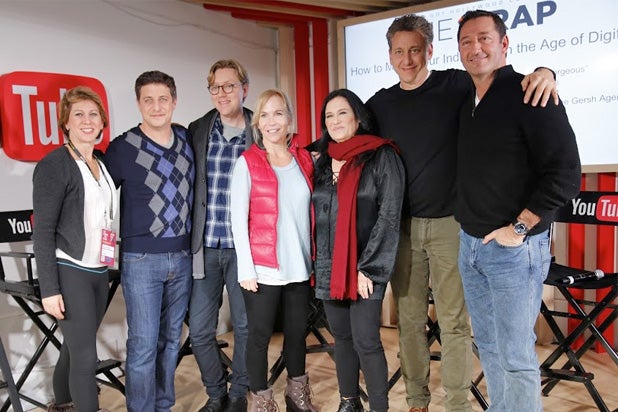 “The notion of pre-selling to your core fans is a logical thing, it happened in theater,” he said. “To say to your fans, ‘You’re going to see this anyway, let’s bypass middle man.'”

Rhodes chimed in, “If you do that successfully, it only brings the middle man to you.”

“It’s just another path up the mountain — what’s interesting is that when you meet hundreds of these YouTube stars, I hear again and again the same story: ‘I wanted to be an actor, director’ and so forth and they wound up starting their own channels,” Shey said.

Noxon, a veteran of TV shows like “Buffy the Vampire Slayer” and “UnREAL” whose feature directorial debut premiered at the festival on Saturday, has served as a mentor at the Sundance Labs and said she often gets a question related to the plight of social media stars (though they might have different goals): How do I make a movie people want to see?

“I hate to be old-fashioned, but you have a story that is unique to you, and told really well,” Noxon said. “You can undermine yourself by putting content out there that’s not good enough.”

Panelists also touched on the content bubble and crowd-funding — and gave some good advice to a budding documentaria. Catch the entire program, hosted by TheWrap and UCLA’s School of Theater, Film and Television, below.