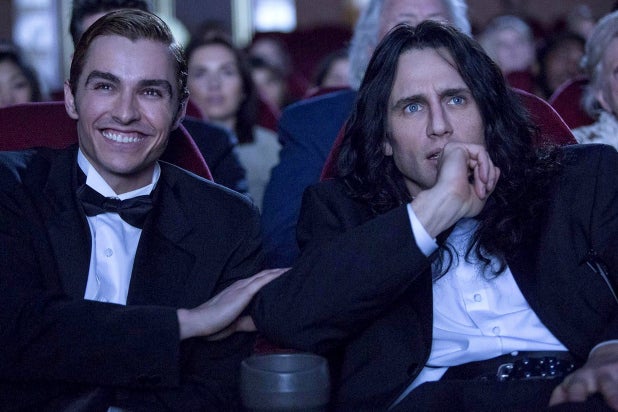 Have we entered “The Room” Cinematic Universe?

The James Franco comedy “The Disaster Artist,” which looks at the making of the catastrophically bad 2003 cult classic “The Room,” is not the kind of movie you’d normally think would have a post-credits scene.

Sure, at the beginning of the credits there is some nifty split-screen action that shows you just how closely Franco and company re-created Tommy Wiseau’s unholy mess of a movie. But this is a far cry from a Marvel superhero movie looking to tease future installments with additional mid-credits and post-credits scenes, isn’t it?

Also Read: 'The Disaster Artist' Review: James Franco Comedy Isn't a Bad Movie, But It's About One

Warning: Spoilers lurk below, though plot points are not high on the list of things that should get you to see “The Disaster Artist.”

There is, in fact, a scene at the very end of the film’s credits — and it’s there not to tease a sequel, but to satisfy a contract that Wiseau negotiated when he signed his life rights over to director James Franco.

The eccentric wannabe filmmaker, a mysterious figure who sounds vaguely Eastern European but claims to be from New Orleans, agreed to be portrayed in the film by Franco under a couple of stipulations: A “Disaster Artist” producer had to listen to his notes once he’d seen a rough cut, though they were under no obligation to follow those notes, and Wiseau himself got to film a scene with Franco.

“This was fascinating for us, because where should that scene go?” co-writer Scott Neustadter told TheWrap. “Who could Tommy play?” (Franco said he has tapes that show that Wiseau is essentially incapable of dropping his distinctive accent.)

Neustadter and his partner Michael H. Weber, with whom he co-wrote films that included “(500) Days of Summer” and “The Fault in Our Stars,” immediately thought of a scene in which Wiseau’s friend Greg Sestero gets an acting job in Romania.

But Sestero, on whose book “The Disaster Artist” is based, is played by Dave Franco, and Wiseau’s contract specified that his scene must be with James Franco.

“So we wrote this scene that took place at a Hollywood party,” said Neustadter, “without realizing that there’s no Hollywood party that would have two guys with that accent.”

Fortunately for them, Wiseau didn’t put in the contract that the scene had to be in the body of the movie (or anywhere in the movie, for that matter), which meant it could be exiled to the tail end of the credits to serve as “a Marvel tag,” in Neustadter’s words.

The scene is what Weber calls “dueling Wiseaus”: Franco, playing Wiseau, is at an outdoor party where he encounters Wiseau, playing somebody named Henry. The two trade fractured jabs and “Tommy” comments on “Henry’s” accent: “Where are you from, New Orleans?”

The trouble, said Neustadter and Weber, is that audiences don’t know the scene is there, which means they often leave during the credits.

“For some reason,” said Weber, “they don’t see our movie and think, ‘This is like “Iron Man,” so I’ve got to see the tag!’ People are walking out, but we have a post-credits sequence that’s up there with the ‘Guardians of the Galaxy’ one with Howard the Duck.”

Wiseau, by the way, also negotiated hair and makeup approval for his scene. His appearance is odd, even by his standards.