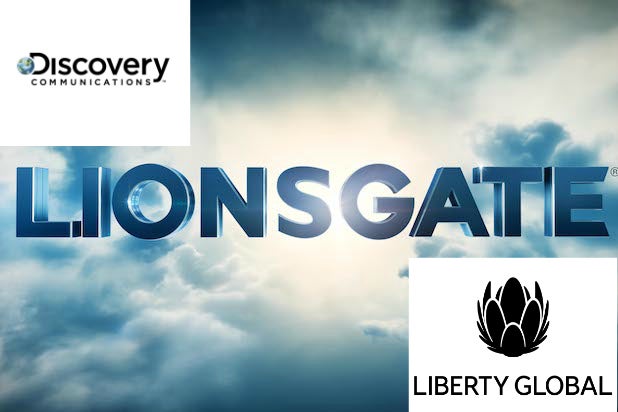 Discovery Communications and Liberty Global are each purchasing 3.4 percent — or five million shares — of Lionsgate for $195 million.

Expected to close later on Tuesday, the shares will be acquired from funds affiliated with MHR Fund Management LLC. As such, MHR’s Emily Fine, Liberty Global President and CEO Mike Fries, and Discovery Communications CEO David Zaslav will all join the Lionsgate Board of Directors. Frank Giustra is stepping down from his chair there after 11 years.

Media investment giant Dr. John Malone is the largest shareholder in both Liberty and Discovery. He now owns a hair over 10 percent of Lionsgate, as his Starz — in which he is also the majority shareholder — and the Jon Feltheimer-led company swapped some stock in February, when Malone also joined the Lionsgate Board.

“We’re very enthusiastic about this alliance with Lionsgate,” said Fries. “Lionsgate is led by an incredible management team and they’ve created one of the deepest portfolio of brands and franchises in the industry. This strategic content investment will also create opportunities for Lionsgate to become an even more important supplier of high-end premium content to our 24 million video and 18 million broadband subscribers.”

“One of Discovery’s advantages is our ownership in a diverse portfolio of global content and IP, which uniquely positions the company to deliver an audience across multiple media ecosystems,” added Zaslav, who believes this affiliation will strengthen his linear and digital pipeline. “Lionsgate has created a strong television business and we are proud to take this ownership stake to gain access to terrific storytellers, creative leadership, and global formats and IP, in both nonfiction and scripted programming.”

“David and Mike are highly accomplished and respected executives who will bring added depth and vision to our Board of Directors,” said Dr. Mark Rachesky, chairman and the largest shareholder of Lionsgate. “I was a very early believer in the value of content, and these new strategic relationships with two of the pre-eminent programming and distribution platforms in the world help position us to take the company to the next level.”

“This transaction aligns Lionsgate with two of the most visionary players in the global marketplace,” added Lionsgate CEO Jon Feltheimer and Vice Chairman Michael Burns. “We believe that this agreement creates tremendous strategic opportunities to grow our content initiatives around the world and positions us to generate significant incremental value for our shareholders.”

Lionsgate unveiled its second quarter 2015 earnings on Tuesday, reporting disappointing results. As such, stock immediately plummeted in after-hours trading. It rallied nicely with the announcement of the Malone investment, though LGF has been up and down in the overall early goings of the U.S. trading day.

The box office flop of “American Ultra,” marketing costs of “The Last Witch Hunter” — which also under-performed — and “Sicario” drove the fiscal shortfall.