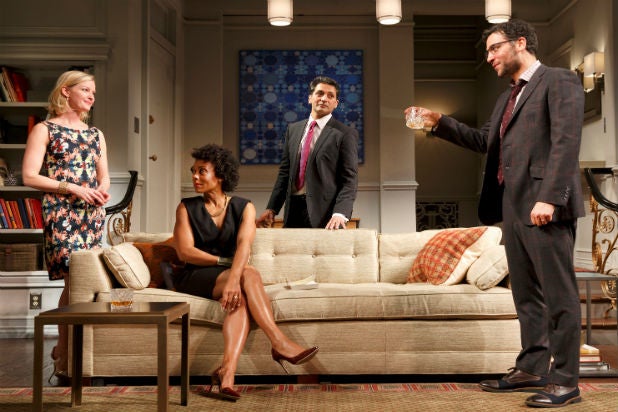 The theater might not have entertained such a party gone bad since George and Martha invited Nick and Honey over for drinks in “Who’s Afraid of Virginia Woolf?”

First off, Akhtar’s wives, Emily (Gretchen Mol) and Jory (Karen Pittman), have jobs. Make that professions. Emily is an painter specializing in Islamic art and Jory is an attorney specializing in screwing over insurance companies. But the arguments — make that fights — that they get into with each other and their husbands, Amir (Hari Dhillon) and Isaac (Josh Radnor), are every bit as ferocious and insulting as what Albee’s characters have to tell each other. There’s even the N-word. And more importantly, what they say is infinitely more topical. Akhtar has loaded his play, making it as ethnically diverse as two married couples can be.

Emily’s a WASP, Jory’s black, Isaac’s Jewish, and Amir is Indian American. Or is he Pakistani American? Despite this obvious construct of ethnicity, the language is so heightened and the discussions about Islamic tile art, the Quran, the British chopping up India, the Jews stealing holy land from the Palestians and how to make a great fennel anchovy salad are so brazen that the real time of this 60-minute scene leaves you shaken.

George Bernard Shaw came at every question from two sides; Akhtar comes at every question with guns firing from all four corners. Two minutes into the dinner party, his ethnic construct doesn’t seem contrived. It recedes, the Indian — and African American characters turn out to be the foursomes’ bona fide conservatives, and soon there’s much more violence on stage than ever entered the heads of George, Martha, and guests.

But, and this is a significant “but,” there’s another 30 minutes to “Disgraced.” Akhtar brackets his dinner party from the Ninth Circle with scenes between Amir and his nephew (Danny Ashok), who calls himself Abe and wears a KidRobot T-shirt in the play’s genial first scene, and calls himself Hussein and wears a kufi in the play’s really didactic final scene.

It’s baffling and more than a little unsatisfying to have a minor character undergo the play’s greatest metamorphosis and to do so offstage when the major characters are fighting it out onstage. It’s as if Albee opened “Virginia Woolf?” with a short scene between Martha and her father and then ended it with Dad leaving his post as college president to join a commune. Nonetheless, it’s one helluva party while it lasts, and well worth the visit, despite the bookends of Abe/Muhammad’s treatise on the evils of assimilation.

“Disgraced” had its New York City premiere Off Off Broadway in 2012 at LCT3, and the new Broadway cast is the same, better, and different. Let’s start with better.

TV and movie stars performing on Broadway are the butt of jokes in not one but two plays now on Broadway — Terrence McNally’s “It’s Only a Play” and Donald Margulies’s “The Country House.” Maybe it’s time for the theater world and its playwrights to ‘fess up to the fact that many of these TV and movie stars actually started in the theater, and, if they didn’t, they are stars in other media for a reason. Mol and Radnor are terrific. She wraps her cool beauty with an assured intelligence that prevents Emily from turning into a liberal-wimp trophy wife. He gives a suspenseful performance, finding an impatient humor in Isaac that keeps the character intriguingly on edge for his entire stage time.

Pittman repeats her sardonic Jory from LCT3, and once again Kimberly Senior directs with finesse.

And Dhillon is different, replacing the “Daily Show’s” Aasif Mandvi, who played a much less accommodating Amir at LCT3. If Dhillon’s Amir ever gets his law career back on track, he could be the Clarence Thomas of Muslims. Both interpretations work and both prove riveting.