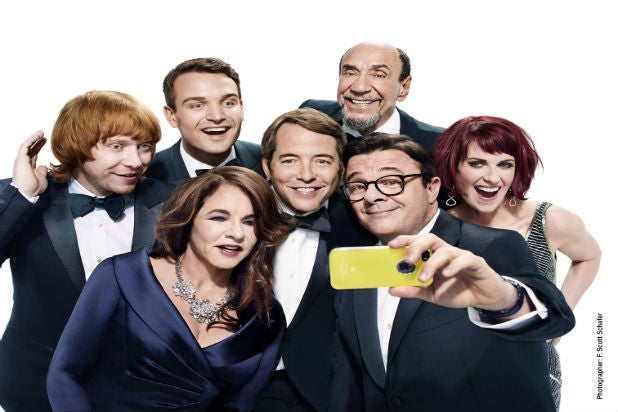 If only it were a better play.

After various incarnations, Terrence McNally’s “It’s Only a Play” has finally made it to Broadway, where it opened Thursday at the Gerald Schoenfeld Theater in a production that reunites Nathan Lane and Matthew Broderick. Back in 1978, this backstage comedy was called “Broadway, Broadway,” starring Geraldine Page and James Coco, and closed in tryouts in Philadelphia, where it didn’t live up to its title. McNally rewrote and retitled the play for productions in the 1980s, and this latest version updates the story of a disastrous post-opening night party to the present day. A lot has changed on Broadway in 30 years, but for McNally it all comes down to changing not much more than a few tons of famous names.

Also read: ‘The Curious Incident of the Dog in the Night-Time’ Theater Review: Now on Broadway, Soon to Be a Movie

McNally doesn’t just drop names — he stomps on them, too. We learn that Alec Baldwin and Shia LaBeouf get into fights, Faye Dunaway’s career is washed up, Ben Brantley has a boyfriend, Audra McDonald might play the title role in “The Music Man,” Daniel Radcliffe wears a little jacket, and Tommy Tune wears a long coat and — for some reason — is still a Broadway legend despite not having worked on Broadway in decades. Indeed, McNally rivals Liz Smith for being up-to-date.

It will be news to McNally that there is now an Internet and opening nighters don’t watch NY1 News to get their first review and then wait for the other notices to arrive from dutiful publicists or messengers on bicycles.

But back to McNally as name-stomping gossip. Really? Dunaway’s career is over? Who knew that McNally’s relationship with the former option holder of his “Master Class” has surpassed in rancor Larry Kramer’s snit with Barbra Streisand?

And that reactionary joke about Brantley’s boyfriend? Would it even qualify as humor if paraphrased to read, “There’s a rumor, unconfirmed, that the novelist is Janet Maslin’s husband’s niece.” Reply: “I didn’t know Maslin had a niece. It sounds like a publisher’s dream.”

These put-downs comprise act one. In act two, the characters take turn reading the bad reviews. Brantley takes more jabs, but frankly, his New York Times reviews are much funnier than McNally’s imitations.

Many of the jokes would fail if not for Lane, Broderick and their savvy director, Jack O’Brien. Broderick is the smoke to Lane’s blowtorch. When Lane doesn’t get a laugh from McNally’s name-calling, he does a double-take better than Johnny Carson or makes an animal sound that Bert Lahr would envy. It’s the scorched-earth approach to comedy, and Lane wrings laughs from cinders.

In his last Broadway show, “Nice Work if You Can Get It,” Broderick didn’t get the biggest laughs; he got the longest laughs. The slyest of comedians, he inflates McNally’s pompous playwright character with just enough helium to make him float above the material.

Elsewhere, F. Murray Abraham delivers a convincing John Simon (sans the accent), whom McNally should have updated to Michael Riedel. Stockard Channing doesn’t stint at playing a burnt-out leading lady and that includes delivering the line “After your review, I changed my face” with stunning aplomb. Unfortunately, Megan Mullally’s “Will & Grace” voice, so funny on the tube, doesn’t translate to the big stage in her portrayal of a rich and clueless producer.

Despite all the jibes, digs, slurs and barbs about show people, “It’s Only a Play” is an old-fashioned valentine to the theater: You just can’t stop these Broadway animals from puttin’ on a show! In that respect, it’s true. Somehow the vet actors deliver and the new talent keeps coming, and it’s nice to report that this revival offers not one, but two, spectacular Broadway debuts: “Harry Potters'” Rupert Grint portrays a manically childish British director and newcomer Micah Stock, playing a coat-check boy, does to “Defying Gravity” what deserves to be done to “Defying Gravity.”