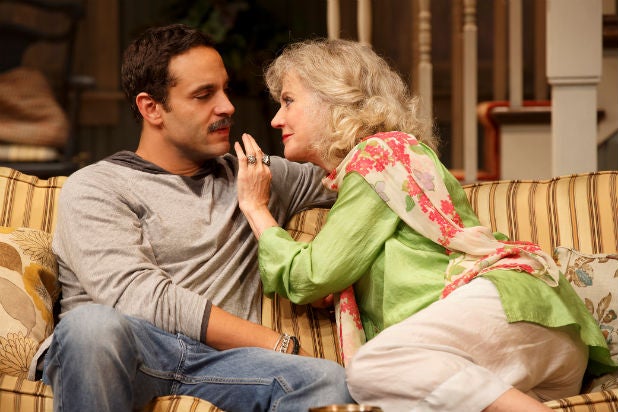 Timing is everything, but in the theater, scheduling also accounts for a lot.

Donald Margulies’ new dramedy, “The Country House,” opened Thursday at MTC’s Samuel J. Friedman Theatre in New York, and it finds this Pulitzer Prize winner (“Dinner with Friends”) mining some of the same showbiz terrain of Neil LaBute‘s new farce, “The Money Shot,” which opened Off Broadway a couple of weeks ago.

Actors’ balloon-like egos, again, are the target of most of the laugh lines, and after seeing LaBute’s bit of fun fluff, it’s a little hard not to cringe when “The Country House” turns serious with this material, especially in the play’s treacly final scene of improbable reunion. It’s also not a good idea to have your wisest character reprimand another character for “sounding like a Lifetime movie” when, in fact, Margulies turns his second act into a Lifetime movie. And really, do even Lifetime movies blame Mommie Dearest for children’s problems anymore?

Blythe Danner‘s Anna Patterson is no Joan Crawford, but she is a stage actress of certain years who has a fragile enough ego to plaster her country home with lots of vintage theater posters from her many past triumphs. Right now, Anna is rehearsing “Mrs. Warren’s Profession” at the Williamstown Theatre Festival, and for some reason she has also planned a family reunion to commemorate the one-year anniversary of her daughter’s death from cancer. The daughter Kathy was also a talented, well-known actress; Anna’s son, Elliot (Eric Lange), is also an actor, although he’s definitely not famous, which is why he has decided to write a play. Anyone who knows “The Seagull” will know that Elliot’s play is a very bad play.

Chekhov doesn’t blame the actress-mother Irina Arkadina for the son Konstantin’s failure; he’s more subtle than that, but it’s pretty clear that “The Country House” does blame Anna, if not for her son’s professional failings then for his lack of self-esteem. Why else would Margulies have written that Freud 101 finale? I won’t give the ending away, but let’s just say it’s not as juicy as the discovery that Joanne Woodward’s multiple personalities in “The Three Faces of Eve” stem from her kissing a corpse.

Before that dreary final scene, Margulies does deliver a moment of very effective high drama. It’s when Elliot’s former brother-in-law Walter (David Rasche in top form) finally tells off the loser actor-writer. Walter, a former stage director, has sold out to Hollywood and is now directing “Truck Stop 4” there. (Are you getting the LaBute connection?) Margulies provides some real audience catharsis with Walter, who makes a very good point about liking money and having no respect for the pretentious Elliots of the world. Believe me, after listening to two hours of Elliot’s whining (Lange makes no attempt to soften the character), the audience desperately needs this release.

Too bad Margulies doesn’t give Anna some equally pungent retorts as well. After Danner’s playing good cop to Robert De Niro‘s bad cop in all those “Focker” movies, it’s fun to see her let go with a bad-momma character. Actually, Anna’s not even a bad mom; rather, she’s just a little chilly. And Danner plays chilly with real panache.

Less convincing are her attempts to show lust for a handsome man half her age, Michael Astor (Daniel Sunjata, proving that good looks don’t mean much). Michael is a stage actor who is now on TV in a hit series playing “Dr. Alec Matheson, chief of extraterrestrial medicine on Lunar Pod VI!” (Even LaBute doesn’t punch that low in his jabs at Hollywood.)

“The Country House” is actually two plays: the sentimental drama of the second act, and the sitcom comedy of the first act. No wonder director Daniel Sullivan can’t make sense of it. He has no choice but to open the play with broad performances to replicate what’s happening in the cute twists of the overly complicated plot. It’s not enough that the septuagenarian Anna lusts for Michael, he also has to be the object of Anna’s teenage granddaughter, Susie (Sarah Steele being droll beyond her years), who, being the one non-theater person in the play, is also the wisest and delivers aphorisms of advice that went out when little Virginia Weidler retired from the movies in the 1940s.

Michael, in turn, lusts for another actress, Nell (Kate Jennings Grant), who is Walter’s new girlfriend, who had a semi-affair (they slept in the same bed but didn’t consummate the affair) with Elliot during a stint at the Humana Festival. (Cue the Louisville jokes here.) Nell now resists Elliot’s advances but doesn’t discourage Michael’s. Does she have the hots for the TV doctor who treats aliens? Let’s just say this sexual hodgepodge explodes at the end of act one with the kind of multi-character showdown that is usually followed with a Cialis commercial on the tube.

It’s bad enough that Walter brings his new girlfriend to a family reunion commemorating the anniversary of Kathy’s death. But do Walter and Nell have to keep telling us it’s a mistake? Anna gives Elliot some advice about first drafts of plays and the need for rewrites. The comment is meant to show her tactlessness and lack of sympathy; nonetheless, it’s good advice.