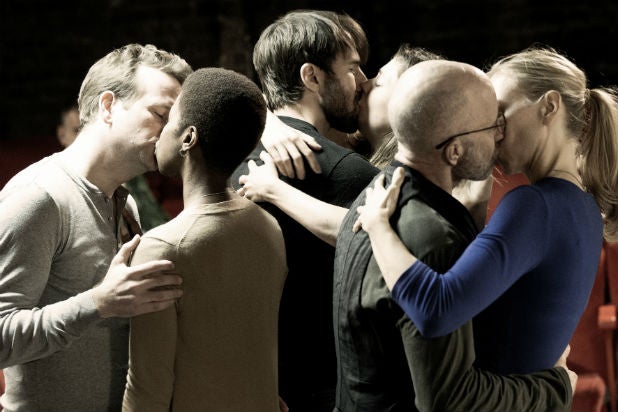 It’s doubtful the Swedish film director would approve — or much less recognize — what Ivo van Hove has done with the 1973 mini-series “Scenes from a Marriage” (later released as a feature film) in its stage adaptation at the New York Theatre Workshop, where it opened Monday.  In many respects, it looks as if that ironic, mocking, playful Godard had been brought in to perform a bizarre send-up of Bergman’s existential angst. In other words, this “Scenes from a Marriage” is the first must-see event of the 2014-15 theater season.

Van Hove is well known for pushing his actors to play the subtext, whether it was in a “Hedda Gabler,” set in a contempo Manhattan penthouse, or a minimalist “Streetcar Named Desire” that eschewed scenery except for that one object we rarely see in a “Streetcar,” the bathtub. Much less effective was his production of “Little Foxes,” because that Lillian Hellman play is not a tragedy, like the Ibsen or the Williams; rather, it’s a melodrama that is devoid of any subtext whatsoever. The characters wear their avarice and greed with pride. Bergman’s writing has that in common with Hellman’s. His character never lets us forget how despairing they are.

In “Scenes from a Marriage” (adapted here by Emily Mann), the married couple Marianne and Johan and their friends Peter (Erin Gann) and Katrina (Carmen Zilles) say pretty much what they’re thinking and feeling at all times. Even Marianne’s mother and her analysand (Mia Katigbak doing double-duty) never hold back. What makes van Hove’s “Scenes” so riveting (its three-and-a-half hours rushes by) is the staging.

This show actually begins before you enter the theater. Ticket holders are given colored wristbands that determine which of the theater’s three venues you’ll be sitting. You, not the actors, rotate venues to witness the play’s first three scenes, which could be titled “The Abortion” (with Flood and Hurt), “Mid-Marriage Malaise” (with Ruff and Roberts), and “The Girlfriend” (with Benko and Howard). Seeing the last scene first might bring back memories of Harold Pinter‘s “Betrayal,” while seeing the second scene first might be more confusing than enlightening.

Jan Versweyveld’s production design is a constant wonder. In addition to the three rooms, there’s a kind of antechamber in the middle that functions as a kitchen with windows that allow the audience to see what’s going on in the other rooms. Arguments and music also seep through the walls, like in a cheap tenement. This isn’t one marriage or even three marriages; it’s everybody’s marriage played out over and over with the same words.

In the play’s stunning second act, the room partitions are removed, and for most of the drama, the three couples recite the same dialogue, enact the same scenes of making love, wrestling, and signing the divorce papers — none of which is delivered in total synchronicity. In one kissing scene, they even switch partners, not unlike that emotional meltdown right before the “Loveland” number in Stephen Sondheim‘s “Follies.”

Never for a moment do these actors recall Liv Ullmann and Erland Josephson from Bergman’s film/TV series. In fact, the level of acting among them varies greatly. No matter. As in life, some husbands and wives are simply better at screaming, lying, fighting, crying, and acting out roles than others.

Van Hove’s view of relationships, as well as Godard’s, is actually much bleaker, more nihilistic than Bergman’s. On stage, this Johan and Marianne travel beyond despair. The predictability of their words and actions have left them trapped in a relationship with no exit.