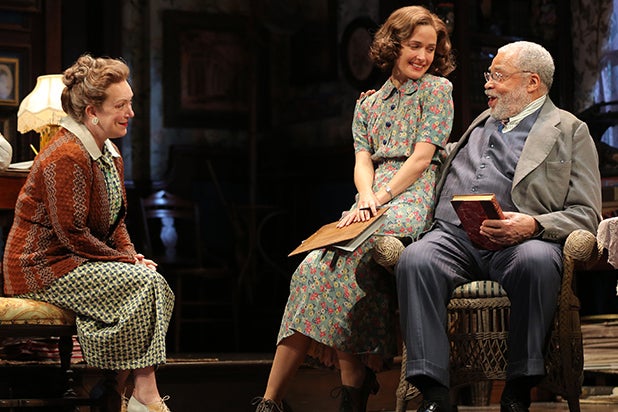 During her “Mulholland Drive” comeback in 2001, Ann Miller was prone to ask reporters why Frank Capra‘s 1938 Academy Award-winning movie, “You Can’t Take It With You,” was never mentioned as one of the director’s best.  Most members of the press were polite to Miller, who played the ballet-obsessed Essie in the film. After all, how do you tell a 76-year-old semi-legend that Capra’s screwball comedy, despite its best picture Oscar, is a sentimental, message-laden bore?

The new Broadway revival of Moss Hart and George S. Kaufman’s 1936 play, which opened Sunday at New York’s Longacre Theatre, is anything but.

Capra treated the crazy Vanderhof family as a bunch of noble individualists, and turned the story into an indictment of capitalism. On the Longacre stage, director Scott Ellis sticks to the original script, of course, but he also knows to treat these miscreants as what they are: a bunch of wacko nut jobs. Gone is Capra’s corn, replaced by a superb laugh machine of a cast that unearths guffaws in places, perhaps, that even Hart and Kaufman didn’t know about.

The somewhat normal granddaughter Alice (Rose Byrne in her Broadway debut) has every reason to fear letting her rich boyfriend, Tony Kirby (Fran Kranz), near these psychos. Of course, they’re nice psychos, although the firecracker factory in the cellar and Grandfather (James Earl Jones) refusing to pay his taxes pushes things to the right of reprehensible at times.

We don’t associate Jones with comedy, but he displays the lightest touch here (unlike the sodden Lionel Barrymore in the film). Has the word “pixilated” ever been used to describe a basso profondo? Jones at times gives the impression of a two-ton hummingbird, and he appears to float whenever he opens his mouth. Somehow the light airiness of his performance provides just the right launching pad for others to soar and bring down the rafters.

The great character actors of Hollywood’s golden age have nothing over these legit troupers, well known to New York audiences, and that includes the always rollicking Kristine Nielsen, Annaleigh Ashford, Reg Rogers, and Julie Halston, who chews every step as she crawls up designer David Rockwell’s magnificent staircase. Only Halston could make chronic alcoholism fashionably hilarious again.

“Take It With You” is the kind of comedy — when well performed — that makes you want to join the actors on stage, even in the small roles essayed here by Halston or Will Brill, whose xylophone-playing husband Ed is an extended, devious portrait in sexual ambiguity. (There’s a reason Ed’s wife, Essie, needs to work out all that pent-up energy in her pointe shoes.)

But does any theatergoer — or professional actress, for that matter — dream of playing good girl Alice? There are better debut roles, and in this particular revival, it’s no doubt a tough assignment being the white bread stuck between Nielsen and Ashford’s multi-layered ham acts? Byrne does succeed in making Alice part of the family, with Nielsen and Ashford playing her crazy mother and sister, respectively. Byrne’s Alice is not without her own eccentricities in the opening scene, but her frustrations never achieve the fury of a well-deserved nervous breakdown that should be funny and suspenseful in its own right.

The blind casting of Jones as the head of the Vanderhof family is only one sign, albeit a major one, that the new Broadway is in many ways better than the old one — and that goes for 1930s Hollywood, too. In this revival, the servants Rheba (Crystal Dickinson) and Donald (Marc Damon Johnson, who erases memories of the legendary Eddie “Rochester” Anderson in the film) sit at the dinner table with everyone else. It’s an invitation they never received in the original 1936 production, as evidenced in historic photos. Worse, the old Production Code, infamous for censoring sex and violence, also went out of its way to make sure that there wasn’t any undue fraternizing of the races in Capra’s picture.

As the code’s Joseph Breen put it to Columbia Pictures’ Harry Cohn, “[When] showing the Negro characters Reba [sic] and Donald, care should be taken to avoid objection in the southern sections of this country where the showing of Negroes in association with whites has sometimes been subjected to criticism by the public … such criticism has been based on the feeling that Negroes in pictures have been shown on terms too familiar and of ‘social equality’.”